Manchester City are set to host AFC Bournemouth in the Premier League game on Saturday, 23 December 2017 at Etihad Stadium and Pep Guardiola’s team will be looking to extend their record winning streak in english top flight. They can stretch their lead at top of the table to 14 points since Manchester United play Leicester City later in the day. Match will be a traditional 3pm kickoff and we will have live links closer to the start of the game.

Pep Guardiola is one manager who is under massive pressure to win something this season after spending over 300 million since taking over as City manager. City disposed off Brighton in the opening premier league game but they were not overly convincing while they struggled to breakdown Everton at Etihad Stadium last monday and it took a late defensive error for them to grab a point after Rooney had put Everton in lead. Things need to accelerate with this City squad otherwise they might be chasing the other title rivals so early in the season. 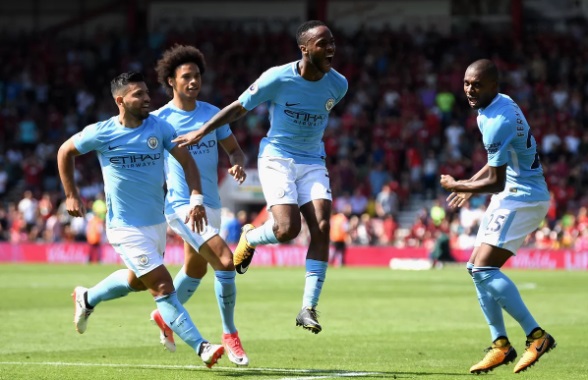 A late goal from Rahim Sterling earned City a 2-1 win at the dean court stadium earlier in the season back in August. However, City have since turn up the heat and look menancing going forward and playing at home I can’t see Bournemouth putting any breaks of this City side.

AFC Bournemouth 1-1 Manchester City August 2017
[ Premier League 2017-18 Match ]
13′ 1 – 0 Charlie Daniels scored absolute scorcher of a goal in 13th minute with a left footed half volley into the far corner. City were shellshocked with a quick start Bournemouth had made in the game.
21′ 1 – 1 Gabriel Jesus however equalized in 21st minute minute after he was put through on goal by De Bruyne after a quickly taken free kick.
90′ 1 – 2 Rahim Sterling goal earned City a late win which will become feature of their season later on.

Team News & Lineups: City will be without prolific goal scorer in Sergio Aguero while the likes of Fabien Delph, Fernando and Captain Vincent Kompany are doubtful. David Silva is set to miss the Bournemouth clash alongside Yaya Toure. But such is the depth in City squad they can still put up a quality starting lineup with Kevin De Bruyne, Nolito and Sterling starting in attacking roles behind Kelechi Iheanacho.

Bournemouth on the other hand will start with Wilson upfront while Jordan Ibe, King and Stanislas to play in attacking roles ahead of Arter and Surman in midfield.

Looking at the both teams its hard to see Bournemouth getting anything out of this game and Guardiola will be hoping for his 8th win in 8th competitive game on Saturday afternoon.

Since the game will be played at traditiona 3pm uk time, there won’t be any tv coverage in the UK but if you missed live action you can always watch match highlights here.