Everton scured a massive 2-1 win in the first leg of Capital One Cup semifinal against Manchester City. Ramiro Mori and Romelu Lukaku were on target for home side while Jesus Navas first goal in ages gave City what could prove to be a very important away goal. Second leg will be played on 26th January 2016. Right now you can watch match Highlights of first leg right here.

Everton hosted Manchester City in the Capital One Cup 2016 semifinal first leg at Goddison Park and it turned out to be a superb game of football with both teams getting loads chances in a very open game. Everton took the lead at the stroke of half time when Ramiro Funes Mori scored in the injury time of first 45 minutes.

Everton looked solid at the back and Lakuku created all sorts of problems for City defense in second half. City created decent chances but failed to finish them. 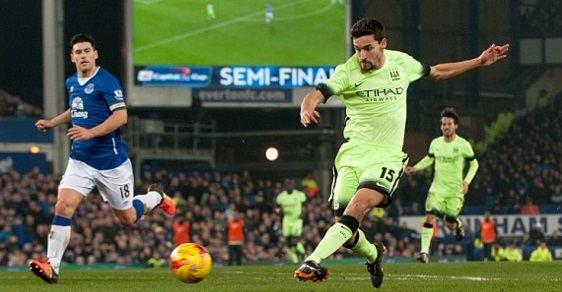 Jesus Navas scored his first goal for Manchester City in over an year in 76th minute to get City back on level terms but minutes later Romelu Lukaku was on target to give Everton 2-1 advantage with 15 minutes to play. This was his 12th goal in last 12 games for Everton. Gareth Barry’s wonderful cross found Lukaku inside the box who headed home.

Everton will play the second leg at Etihad Stadium and all they need to do is get a draw to progress to their Capital One Cup final which might well be against Liverpool who are leading against Stoke City 1-0 after first leg. You can watch the match highlights of first leg from Goddison Park right here on this page.