Huddersfield Town are set to host current league leaders Manchester City at the Kirklees Stadium on Sunday, 26th November 2017 which will be the last game of the weekend in premier league. If United, Chelsea and Liverpool somehow drop points that give City a chance to extend their lead but it also put them slightly under pressure to continue their absolute beast form with a win as by the time they take the field their lead at top of the table might have been reduced to 5 points.

City have been imperious this season and apart from couple of wobbly performances at the start of the season they now sit top of the table with 8 points lead after just 12 games this season. Huddersfield on the other hand are not doing bad either considering they were promoted to Premier League and have been superb at Kirklees Stadium winning 3 drawing 2 and losing just 1 of the opening 6 home matches. City will find it hard to break them down but considering their form they eventually will at some point.

Team News & Lineups: City are likely to make whole list of changes with Sergio Aguero on the bench just to keep him fresh considering Gabriel’s injury. Iheanacho to be given another chance upfront while Guardiola might turn to Navas and Nolito for pace upfront. T

This is how I expect both teams to lineup on Sunday evening. 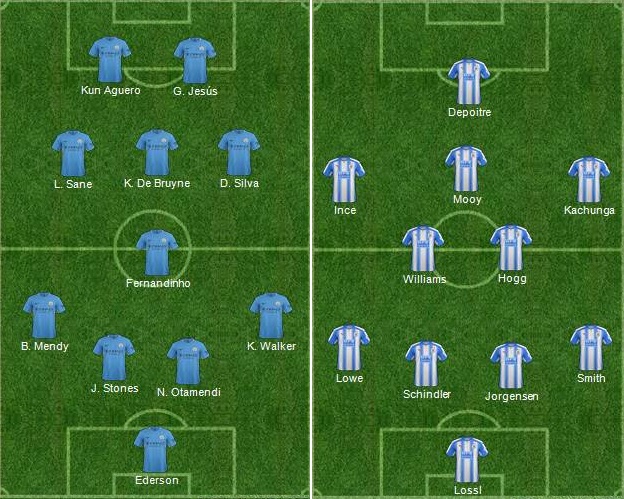 Match Predictions: Last time these two meet in this competition was back in 1988 when City secured win over two replays. Only other meeting between the two was almost a century ago where City won in FA Cup fourth round. On paper City should sail through this tie but alot depend on how Guardiola’s goes about his team selection. Huddersfield do have pacy players who can exploit City’s defense. However they need to keep City quite which on current form is a hard job to do. I am going with a comfortable 3-1 win for City in this one.