Juventus took on Manchester City in the UEFA CHampions League game on wednesday night and they took an early lead through Mario Mandzukic in 18th minute. City had number of chances in the first half but they failed to make Juventus pay. We will have match highlights of this game after the match.

Manchester City will travel to face Italian champions Juventus in the 5th group stage game of Champions League although Man City has already qualified for knockout stages they can confirm their place as group winners with a win against Juventus. Juventus need just a point to qualify but a win would take them 2 points clear at the top of group. So its all setup for a cracking game at Juventus Stadium in Turin.

Juventus vs Man City Preview: Both meet on the first matchday of Champions League at the Etihad Stadium and it was Juventus who ran out 2-1 winners with Madzukic and Morata scored twice to give Juventus 2-1 win over City. Since than City has turned things around and winning all three game after that which put them on 9 points after 4 games and a win will ensure their qualification to next round as group winners.

Juventus will be without new summer signing Hernanes who will miss best part of next 1 month While Sami Khadira and Roberto Pereyra will also be missing through their respective fitness issues. Full backs Evra and Martin Caceres are doubtful and will be assessed before the game. City also has their own injury worries with the likes of David Silva, Wilfried Bony and Samir Nasri all missing but they have a good news with Captain Vincent Kompany returning to starting eleven having missed out last weekend. This is how I expect both teams to lineup on wednesday night. 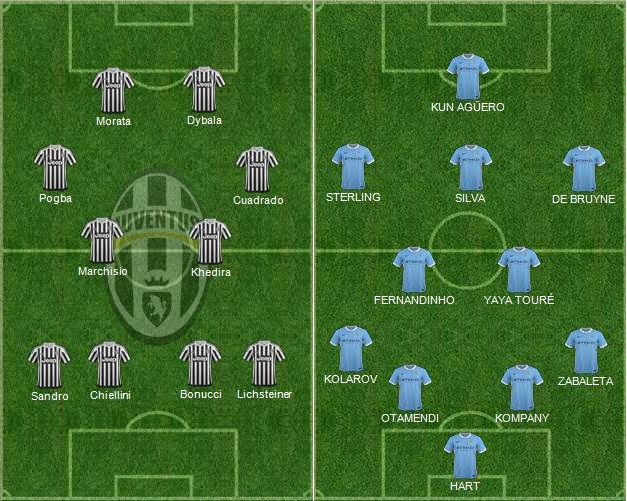 Predictions: City coming into this game on the back of a devastating 4-1 defeat in the hands of Liverpool but unlike previous champions league seasons they have found a key to not only break down teams in europe but also make it hard to score against. Juventus will be confident after that superb win over Milan last week and they will be slight favourites going into the home match. I am sitting on the fense in this one with a score draw which will ensure both teams qualification to next round.