Jose Mourinho and his Manchester United side are set to host Brighton & Hove Albion this Saturday, 25 November 2017 at Old Trafford. A game which gives them oppertunity to reduce the gap at top of the table to just 5 points as City play later in the weekend on Sunday. United can also pull away from their top 4 rivals as Chelsea visit Liverpool later on Saturday evening. This is a must win game for United which kicks off at traditional 3pm kickoff time in the UK which means no coverage in the country.

Match Preview & Lineups: Jose Mourinho made as many as 6 changes in the starting lineup which lost to FC Basel in the Champions League during midweek and we can expect some of the big names back in the starting lineup for home game against Brighton. Namanja Matic, De Gea, Valencia, Young, Rashford and Mkhitaryan are set to start for United with Lukaku playing upfront while Pogba connecting the midfield to attack.

Manchester United have been absolute imperious at home having won 12 straight games in all competitions while in the league they have won their recent 7 matches and as the form suggest they can make it 8 in a row by beating newly promoted Brighton side who are doing very well in their first season in premier league. However considering United’s last home defeat was back in September last year when City defeated United 2-1 and they have been on a unbeaten run of 38 games at Old Trafford its hard to see Brighton halting that run.

This is how I expect both teams to lineup on Saturday afternoon. Martial, Lukaku and Rashford to start upfront with Mata, Pogba and Matic taking the central midfield roles. 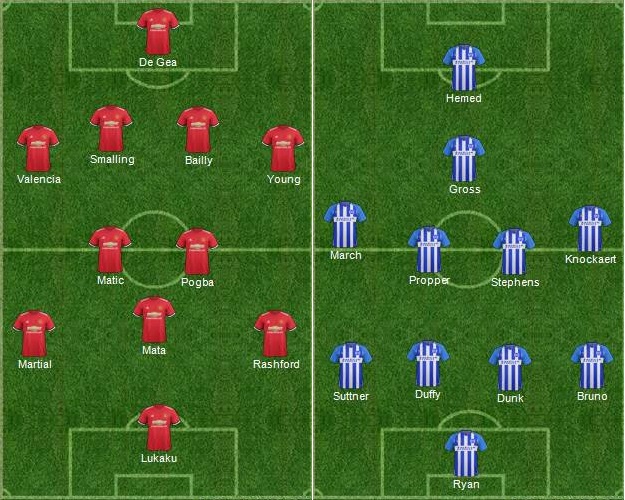 Match Predictions: United have been unbeaten at home for 38 games in all competitions and they are highly likely to continue that with another win on Saturday against a Brighton side who are a decent team and doing very well in their first season in the english top division but not many people expect them to get much away from home against the traditional top 6. I am going with a comfortable United with with Lukaku and Martial to be on target in the game.