Manchester United are set to visit Bristol City for the quarterfinals of 2017-18 Caraboa Cup (EFL Cup) this wednesday night, 20th December 2017 in a game set to be played at the Ashton Gate Stadium. Manchester United are the defending champions, however with United invovled in other big tournaments, we can expect Mourinho to field a under-strength side against Bristol City specially as games come thick and fast in festive period. The match will be kicking off at around 19:45 uk time and we will have live links closer to the kickoff.

Jose Mourinho has always taken English League Cup seriously as he consider it to be a foundation for rest of the season. Last year United won the tournament beating Southampton in the final and we can expect United to make it to the semifinals atleast where they will face one of the other big teams. However, Mourinho is likely to hand some of the fringe players a start in this game against Bristol with the likes of Mkhytaryan, Ibrahimovic, Romero, Blind, Luke Shaw set to start for United.

Bristol City are a decent side who are one of the favourites to qualify for Premier League next season. Currently sitting pretty at third place in Championship. They will give it a right go at United on Wednesday night hoping to get a place in the semifinals. Lee Johnson has transformed this Bristol City side who are one of the surprise packages of the season so far.

This is how i expect both teams to lineup. Paul Pogba might be handed a start after completing his three game ban to gain some much needed match fitness going into the festive period. 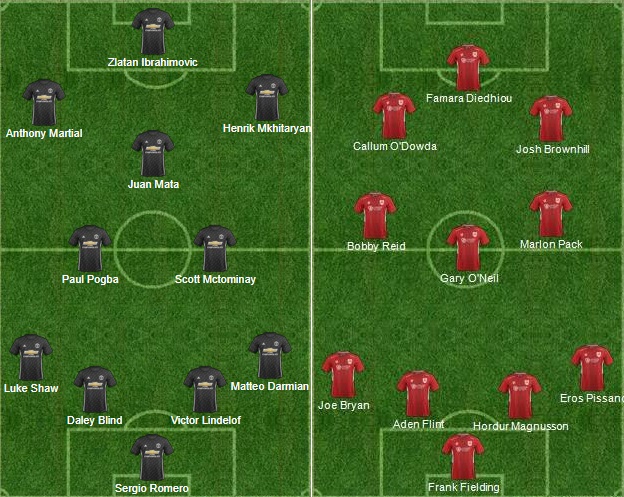 Match Predictions: Off late United have been playing not so well but winning games consistantly bar that City match where they lost 2-1 at Old Trafford. United tend to start stronger take a commanding lead and take the foot of the gas specially in some of the recent away games. I expect a similar scenario here with United dominating at the start but if they take the lead it might turn out to be another smash and grab.