Manchester United are set to take on CSKA Moscow in the UEFA Champions League group A game on Tuesday night, 05 December 2017 at Old Trafford, Manchester. Its a big game for Jose Mourinho and his men still have not qualified for knockout stages however sit comfortably with 12 points and even with a defeat they can make it to the knockout stages as group winners so we can expect Mourinho to start with some fringe players and we might see Ibrahimovic and Rashford starting upfront with Fellaini, Pogba and Mkhytaryan playing central midfield roles.

CSKA Moscow vs Manchester United Preview: CSKA Moscow are a tough nut to crack at home and having already beaten Benfica couple of weeks ago they will be confident of getting a positive result against United. Manchester United however look far more resilient side this season under Jose Mourinho and their performances so early in the season have not only made them Premier League title favourites but also people are predicting them to go far in the Champions League..

Jose Mourinho however do have some injury concerns with Pogba out of the picture for atleast a month and Fellaini also missed the trip to Russia Mourinho might have to use a youngster in the midfield. Matic, Herrera and Carrick are the only three options and with weekend game also in mind we might see one of the youngsters lining up in the midfield. Martial should start with Lukaku and Mkhitaryan upfront.

CSKA Moscwo will be without the likes of Vasili Berezutski and Bibras Natkho but rest of the squad is fit with Musa, Dzagoev and former United player Tosic are expected to playing attacking roles. This is how I expect both teams to lineup going into todays match. 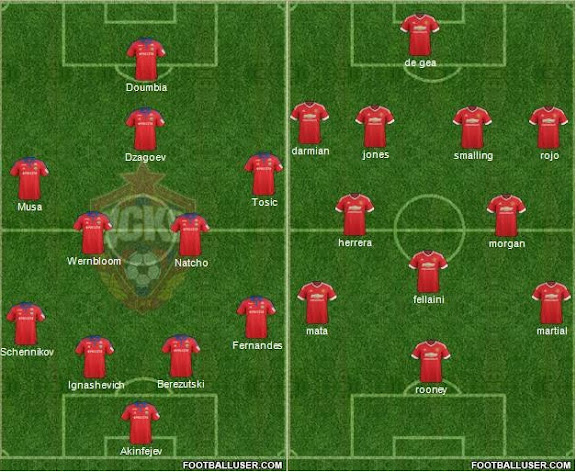 Match Predictions: Last time both teams meet was back in 2009-10 season when United earned an important 1-0 win away in Moscow while the game at Old Trafford was a goal glore with CSKA leading 3-1 most of the game only for United to comeback in typical fashion getting two goals in last 5 minutes to earn a draw. This game however is a different story with United not the same team anymore and I can expect a tough game for Manchester United but they should have enough quality to atleast get a draw. Match Highlights will be available after the game.

Manchester United dominated the home game against CSKA but failed to take chances in the first half and it looked increasingly unconfortable for United in second half as they game wore at 0-0. CSKA Moscow hit United on counter and superb defending from Smalling helped United keep CSKA away which lead to Rooney scoring on the other end in 79th minute. United go top of the group with 7 points and they need 1 win in the last 2 games to qualify for next round.

Manchester United made hard work of CSKA Moscow in their away game where they went behind early on in the game but a goal from Martial in second half earned a 1-1 draw which is a good result considering United will play 2 home matches in last three games.

Anthony Martial turned from zero to hero with a second half diving header to earn valuable 1 point for Manchester United in their champions League group game against Russian outfit CSKA Moscow. Home side had taken the lead early in first half when Anthony Martial handled the ball inside the box and CSKA were awarded a penalty which was saved by De Gea but Doumbia scored on the rebound to get his side in the lead.