Manchester United are set to take on Derby County in the English FA Cup third round game on Friday night, 05 January 2018 at Old Trafford. Having already lost to Bristol and getting knocked out of League Cup, Manchester United will be hoping for a better run in the FA Cup this season. A win will put them in the fourth round where they can build on it and hope for a final appearance again. The match will be kicking off at around 20:00 uk time and we will have full match highlights of the game right here just in case if you missed the live action.

Manchester United absolutely dominated the first half against Derby but they went into the break with score level on 1-1. Wayne Rooney had given United an early lead with a superb curling effort in 16th minute. United created couple of more good chances but failed to convert while Derby County equalized totally against the run of play when George Thorne scored to make it 1-1. Daley Blind and Juan Mata were on target in second half to get United through to the fifth round.

iPro Stadium hosted Manchester United vs Derby County in the fourth round of FA Cup tie and it turned out to be a superb game with United scoring in 16th minute with a amazing curling effort from Wayne Rooney but Thorne scored for Derby to make it 1-1 on the night. Daley Blind scored the second for United from Lingards low cross in the box while Martial expertly assist Mata for United’s third and all three points.

Preview: Louis Van Gaal saw off yet another storm of speculations about his future after United’s home defeat against Southampton last weekend. British media almost had Van Gaal sacked and everyone was waiting for the news but here we are going into important FA Cup tie against Derby and Van Gaal will still be at the helm of United. One would imagine a surprising defeat against Derby will surely end Van Gaal’s reign as United manager and rightly so as team has gone backwards this season after getting decent fourth position in the league last year.

Manchester United are on a terrible run of form winning just 7 games in the last 22 in all competitions, drawing 9 and losing 6. This is unacceptable and we can safely assume that any other result than a win over Derby will certainly end Van Gaal’s time as United manager.

Team News & Lineups: Manchester United will be without the likes of Bastian Schweinsteiger and Phil Jones for sure but Michael Carrick will be back after missing several weeks with injury. Derby county on the other hand are expected to start with Martin, Blackman and Ince upfront while M Lowe, C Forsyth and W Hughes will be missing through long-term injuries.

This is how both teams are expected to start this Friday night, 29 January 2016. Confirmed team news will be available couple of hours before the game. 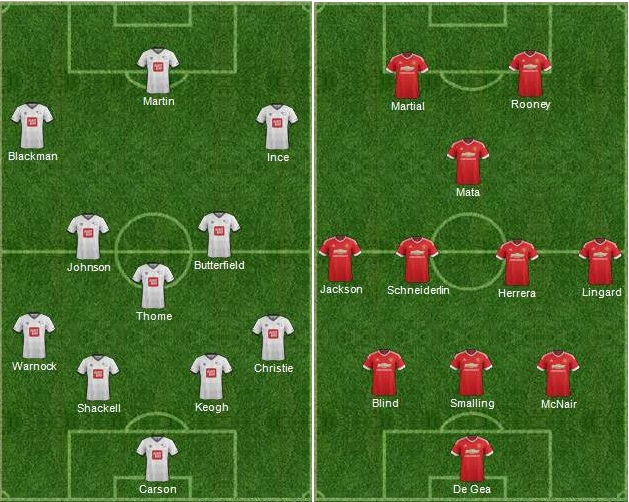 United must win this game or fans will turn on the team full fledg. Van Gaal’s sack is very much inevitable if he fails in next couple of games and with several players missing throughout injuries United might have to start with Lingard and Januzaj in the starting lineup. On paper United should win this game, but I can’t see them getting past even the out of sort championship side Derby Country.