Manchester City are set to take on dutch champions Feyenoord in the UEFA Champions League game on Tuesday night, 21 November 2017 at Etihad Stadium. Manchester City has already qualified for the knockout stages and we can expect Pep Guardiola to make whole list of changes in this game but even with the changes they are strong enough to get another three points specially playing at home. 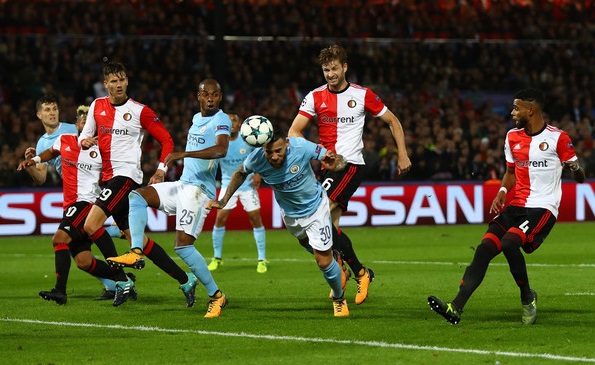 The game kicksoff at around 20:45 CET / 19:45 uk time and we will have live links closer to the kickoff. However if you missed the live action, you can always tune in here for full match highlights after the game is over.

Feyenoord who are currently top of the table with 7 points can book their place in knockout stages with a win and having already beaten United earlier in the season they will be confident of atleast getting a point at Old Trafford. However if United win and Fenerbahce lose their game against Zorya, United will qualify with a game to spare.

Team News & Starting Lineups: Mourinho has rested the likes of Wayne Rooney, Luke Shaw, Antonio Valencia, Henrikh Mkhitarya and Jesse Lingard which means we might see several changes in the starting lineup. Rashford is certain to start alongside Martial and Ibrahimovic while Mata, Herrera might also get a chance one way or the other. Below is the possible starting lineups of both teams.

Feyenoord on the other hand has made absolute superb start in the Dutch Eredivisie winning all five of their opening league games and they will certainly provide a difficult game for United on Thursday night. Its widely expected Jose Mourinho will use Europa League for his fringe players and might only take it serious if they get far in the tournament just to make sure main players stay fresh for important league game.

The match will be early kickoff on Thursday evening starting at around 17:00 uk time and BT Sports will have live coverage in the UK but if you don’t have access to live action you can always tune in here for short match highlights after the game is over.