Manchester United will play Galatasaray in the high profile friendly game this Saturday night, 30th July 2016 at the Ullevi Stadium in Gothenborg, Sweden. Zlatan Ibrahimovic is expected to play some part and make his debut for United. Jose Mourinho has all the squad to choose from as number of key players are back after extended rest including the likes of french internationals Anthony Martial, Morgan Schneiderlin, Marouane Fellaini and Darmian.

Galatasaray have some quality players in their squad and we can expect a tight game on Saturday where Jose Mourinho will be looking to get back on track after terrible tour of China where they lost against Dortmund and friendly game City was canceled due to poor pitch conditions. There is only one game in the pre-season before United start their competitive season against Leicester City in about weeks time at Wembley. 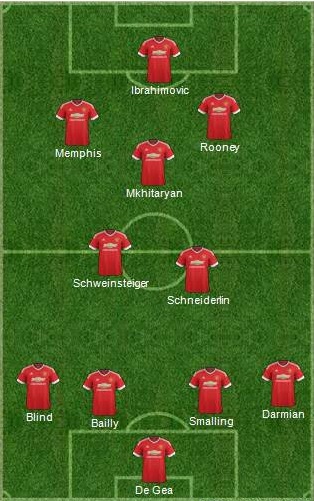 Paul Pogba’s announcement is immenent and we might get the official confirmation before United takes the field against turkish giants on saturday night. The game will be broadcasted live on MUTV and we will have live streams as well as full match highlights just in case you missed the live action.

Zlatan Ibrahimovic is likely to start upfront with Rooney, Memphis Depay and Mkhitaryan playing attacking roles infront of Schweisteiger and Schneiderlin. Italian international Matteo Darmian is back in the squad and he should play some part in the back four with Smalling, Bailly and Shaw.

Jose Mourinho has gone about the pre-season business without much of a fuss and we can expect a good performance from United before they return to Manchester where they will be facing Everton in the Wayne Rooney testimonial game scheduled on Wednesday night.

Match Highlights: The game is scheduled to start at around 18:30 uk time and we will have live streaming links as well as full match highlights just after the final whistle right here on this page.