Manchester United are set to take on city rivals Manchester City in the premier league game on Super Sunday, 10th December 2017 at Old Trafford. This is widerly regarded as the biggest game in England this season, not only because this one is a big derby but also the first against the second. A win for City in this one pretty much put them out of sight in terms of title race while a win for United bring the title race back on with other teams also hoping for a United win. The game kicks off at around 16:30 uk time. Skysports has live coverage of all three big games on Sunday.

Manchester United 1-2 Manchester City Highlights
[ Premier League 2017-18 Match ]
43′ 0 – 1 David Silva scores an unlikely and pretty much a lucky goal towards the end of the first half when ball fall nicely for him after Lukaku failed to clear the corner.
45′ 1 – 1 Marcus Rashford however put United right back on level terms minutes later when he latched on to a lose ball inside the ball and poked home with a superb low finish.

Manchester United vs Man City Preview: Manchester City are flying high and playing some top notch football under manager Pep Guardiola, however they lost their first game of the season against Shakhter Dontesk albeit with under strength side. Manchester United on the other hand won two back to back difficult away games in the league and keeping themselves in the title race going into the derby.

The build up to the Manchester Derby has been the title talk and how impressive City’s form has been in the league so far this season. At the same time, United are the only team who can put the brakes on City’s Juggernaut. Last season these two meet three times with United losing at Old Trafford in premie league but winning in the EFL Cup and drawing at Etihad Stadium. We can expect another tight game on Sunday. 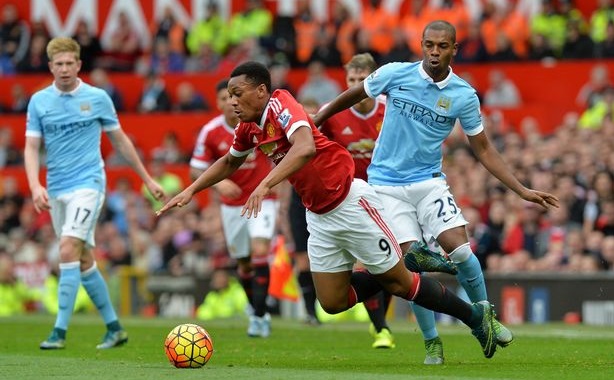 Last time these two meet in the premier league was back in April 2017 when City managed to hold on to a 0-0 draw at Etihad Stadium Both teams set out to play for a draw and thats exactly what happened in a season where both were struggling to get into the top four.

Manchester City 0-0 Manchester United – April 2017
[ Premier League 2017 Match ]
45′ [ Halftime Report ] Man City absolute bossed the first 45 minutes with around 70% possession however it was United who had couple of great chances to score. 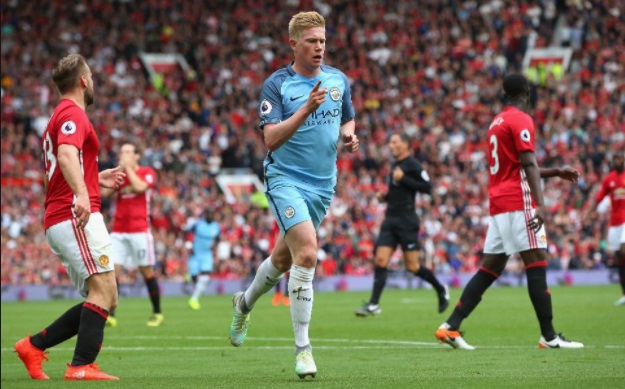 Guardiola started his City tenure with a massive win over United at Old Trafford when City raced to a 0-2 lead after dominating the opening 45 minutes. However Zlatan’s goal just before the half time and United’s second half performance had them under pressure for remainder of the game. It was good game where United were unlucky to lose on the day.

Manchester United 1-2 Manchester City – September 2016
[ Premier League Match 2016-17 ]
15′ 0 – 1 Kevin de Bruyne scores after Iheanacho’s flick on fall into his path nicely and he netted home with a sweet finish.
36′ 0 – 2 Kelechi Iheanacho taps home from close range after De Bruyne’s shot rebound of the cross bar.
42′ 1 – 2 Zlatan Ibrahimovic made it 2-1 just before the break to keep United in the game.

Team News & Possible Starting Lineups: Jose Mourinho is likely to start with Ibrahimovic upfront while Martial, Rooney and Mata to start in attacking roles. Fellaini has recovered enough to get a place in midfield alongside Paul Pogba while Blind, Bailly, Shaw and Valencia to keep their place in back four.

Manchester City will be without Vincent Kompany, De Bruyne with Otamendi also doubtful leaving them short at options at the back which means Mangala and Demichelis are set to start at heart of the defense. Aguero, Silva, Sterling and Yaya Toure to play in attacking roles while Fernando and Fernandinho to keep their places in central midfield. 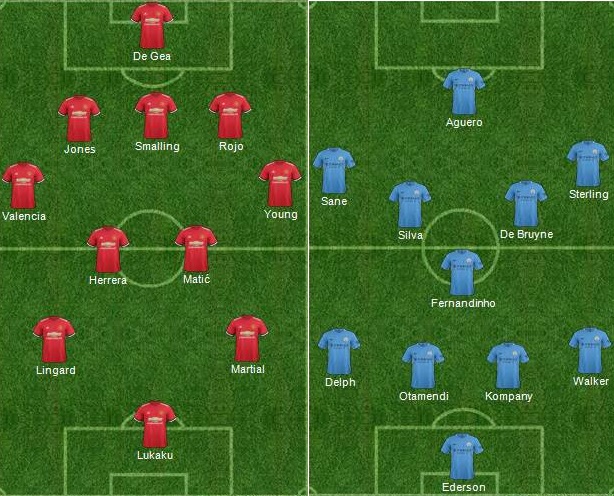 Predictions: Its a tough one to call, City has made absolute superb start under new manager Guardiola who is one manager with a impressive record over Mourinho. But United look a quality side at Old Trafford and that might turn out to be the turning point this weekend. Ibrahimovic physical presence upfront might shake Man City defense and I am going with a narrow 1-0 win for United in this one.