Louis Van Gaal’s Manchester United are out of the Capital One Cup with Middlesbrough holding them at a 0-0 scoreline in normal and extra time. Rooney, Carrick and Young missed their penalties leaving United crashing out of the competition.

Manchester United will be looking to book their place in the quarter finals of 2015 Capital One Cup when they take on Middlesbrough this wednesday night at around 19:45 uk time. Middlesbrough knockout out United with a famous win on penalties.

Manchester United are set to take on Middlesbrough in the capital one cup fourth round tie this wednesday night at around 19:45 uk time. With Arsenal and Chelsea already out of the competition this is one trophy where Louis Van Gaal can earn his first silverware as United manager so we can expect a strong side against Championship side middlesbrough.

Premier League teams can not take lower division sides lightly as we saw on tuesday night when Sheffield Wednesday secure an historic 3-0 win against Arsenal. Manchester United have some injury worries with the likes of Valencia also ruled out. Louis Van Gaal has decided to wait till wednesday to hand call ups for fourth round tie but we can expect Andrea Perreira and James Wilson and Jesse Lingard playing some part in the game.

Sergio Romero might come in for David De Gea while Paddy McNair and Marouane Fellaini might also start for Manchester United. Middlesbrough on the other hand also have some injury worries specially Stuart Downing who might not feature against United having suffered knock against Wolves over the weekend. This is how I expect both teams to lineup for the Wednesday capital one cup. 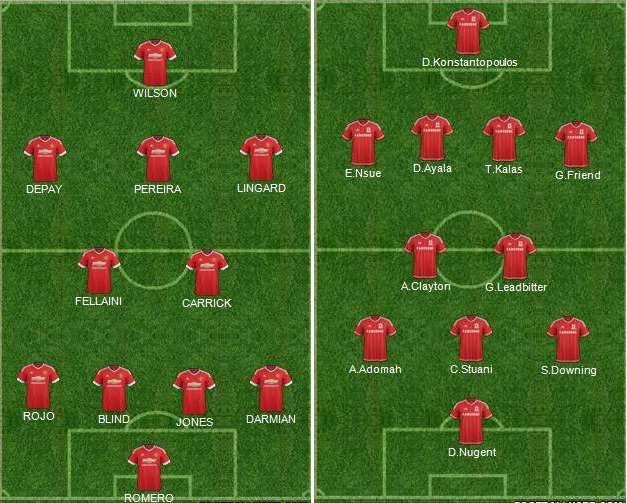 Match Predictions: United has been superb this season at Old Trafford and even with some of the key players rested United should have enough in them to get a good result against Middlesbrough. Arsenal 3-0 defeat against Sheffield will also have effect on United’s performance as Van Gaal will make sure his team won’t under estimate Middlesbrough and play with normal intensity. I am going with a 3-1 win for United with Wilson, Fellaini on the score-sheet.