Manchester United took on Norwich City at Carrow Road for their all important league game which hold significant important for United’s chances of top 4 finish but they really made a mess of it for most part. Martial had to withdraw with late injury while Van Gaal left several players out of the squad including Rashford and that almost back fired as Norwich City frustrated united throughout the first half. But a thanks to a mistake from Bassong in second half Rooney played Mata through on goal who put the ball in the back of the net to make it 1-0 for United. 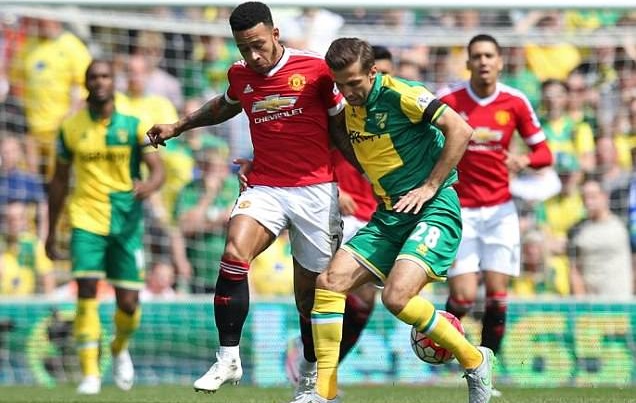 Norwich City 0-1 Manchester United
[ English Premier League, Saturday, 07 May 2016 ]
72′ 0 – 1 Juan Mata scored from close range after Rooney squared a ball inside the box after Sebastian Bassong failed to read a longball and misjudged his header.

Last time these two meet was back in december when United were humbled at home with Norwich winning 2-1 in what was a historic game for the club. Since than alot has changed and United have improved dramatically under Van Gaal and they can really end their season on a high by snatching fourth place away from City and also winning the FA Cup.

Team News & Lineups: Louis Van Gaal will be slightly happy with some of the injured players coming back to full fitness with Wayne Rooney, Herrera trained on friday and are likely to be part of the squad. Ashley Young is also in the contention after missing out against Bournemouth last weekend. Anthony Martial, Rooney and Depay might start upfront with Mata,  Morgan Schneiderlin and Carrick playing in midfield. United still has problems with defensive players with Smalling, Darmien, Rojo all ruled out which means Phil Jones, Daley Blind, Varela and  Ashley Young are set to be part of the back four.

Norwich City on the other hand will start with Lewis Grabban with Graham Dorrans, Nathan Redmond and Alexander Tettey playing in attacking midfield roles. Here is how I see both teams lining up this saturday. 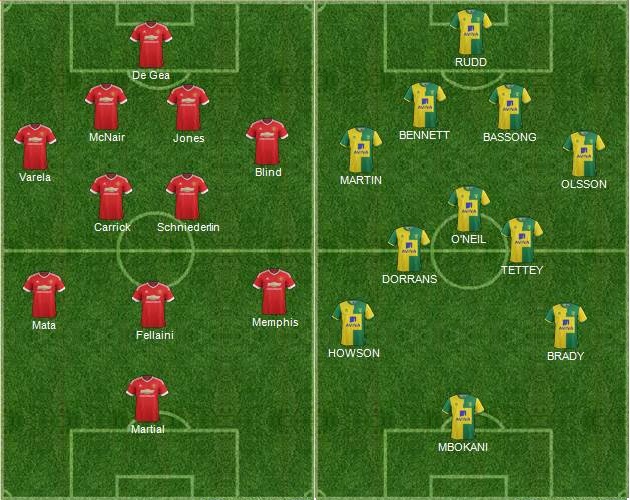 Match Predictions: Jose Mourinho is sacked by Chelsea and Louis Van Gaal might suffer the same fate if his team continue their win-less streak in next couple of weeks. This home game against Norwich holds so much importance for United chance of the title as well as finishing in the top. They simply can not afford to drop points against Norwich and I expect them to come good and win the game with Rooney returning and getting on the scoresheet.

So is this the end of the road for Louis Van Gaal ? United suffered a shock defeat as Norwich City win their first ever game at Old Trafford against extremely lackluster Manchester United side who never looked like scoring. Cameron Jerome first half strike while Alexander Tettey made it 2-0 just after the break. Martial’s goal was not enough to get United back into the match. 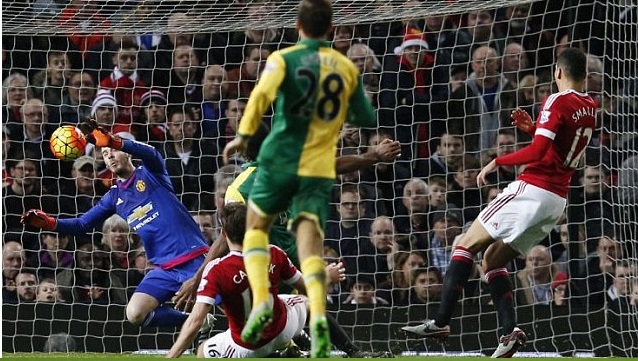 Manchester United season is going from bad to worse as they suffered another shocking result against Norwich City on saturday making it 6 games without a win. Norwich City scored either side of the break to take 2-0 lead and left United fans at Old Trafford absolute bamboozled. Louis Van Gaal will be under massive pressure and with Jose Mourinho available we might have a surprise this weekend.