Manchester United took on PSV Eindhoven in the champions league matchday six and it turned out a 0-0 draw leaving United to get a positive result against Wolfsburg in the last group stage fixture to ensure qualification to next round. United had plenty of chances in the first half and a couple after break but they lacked cutting edge.

Manchester United can ensure their qualification to next round with a win against PSV Eindhoven on wedneday night, 25 November 2015. United are currently sitting top of the table with 7 points but both PSV and Wolfsburg have 6 points each so this PSV game is kind of must win for United specially since they are playing at home. The game will starting at around 19:45 uk time and BT Sports 1 will have live coverage of this game. We will have match highlights and extended replay video of the game afterwards.

Short Match Preview & Team News: Last time the both teams meet was back in 15th September 2015 when PSV secured a come from behind win against United. Memphis Depay had put United 1-0 up before the break but a goal from Hector Moreno at the stroke of half time and Narsingh’s second half strike completed surprising win for PSV where Luke Shaw was brutally injured by Moreno.

United currently struggling with massive injury problems with the Phil Jones, Herrera, Marital, Valencia, Fellaini and Michael Carrick all injured or atleast doubtful for the PSV game. Good news is that Rooney is available after missing the weekend action against Watford. This is how I expect both teams to lineup ahead of massive PSV game. 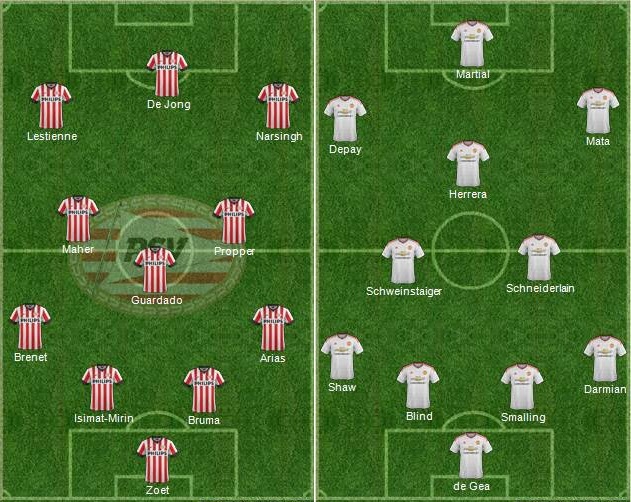 Match Predictions: Manchester United are not firing on all cylendars but they keep winning games one way or the other. The win against Watford come with injury time winner which will boost their confidence and at Old Trafford they should have enough fire power to see off PSV side. United also did not deserve to lose that away tie against PSV earlier in the season but at Old Trafford United are very difficult to defend against.