Manchester United are set to take on Spanish side Sevilla in the UEFA Champions League round of 16 first leg tie on Wednesday night, 21 February 2018 at the Ramón Sánchez Pizjuán Stadium in Sevilla, Spain. First leg holds the key for United as far as this tie is concerned, if they can come away with a positive result they will be favourites to go through. Sevilla on the other hand must contain United and take something to defend against for the second leg to stand a chance of going through. The first leg will kickoff at around 20:45 CET / 19:45 uk time and if you missed the live action, you can always tune in here for full match highlights.

Manchester United’s Champions League campaign resume with the first leg of Champions League round of 16 tie this Wednesday night in what will be a tricky away fixture against Sevilla. United’s away from has been not the best this season and they have relied heavily on their home form so far while Sevilla also have had similar issues losing 8 away games in the league and failing to win any of their away matches in group stages. United must fancy their chance of getting through to the next round however, Sevilla do turn up on big European nights and they might have a surprise in place.

Team News & Possible Lineups: Manchester United manager Jose Mourinho and Paul Pogba are not at the best of terms and it will be interesting to see whether Pogba recover in time from his illness be part of the squad. Mourinho hinted he might play with three midfielders to give Pogba more freedom in final third but its remain to be seen. Lukaku to start upfront with Sanchez and Martial playing as wingers while Pogba, Matic and possibly Herrera to start in central midfield roles. Its the defensive issues hurting United at the moment with only Jones and Smalling fit to play in central defense roles. This is how I expect both teams to lineup on Wednesday night. 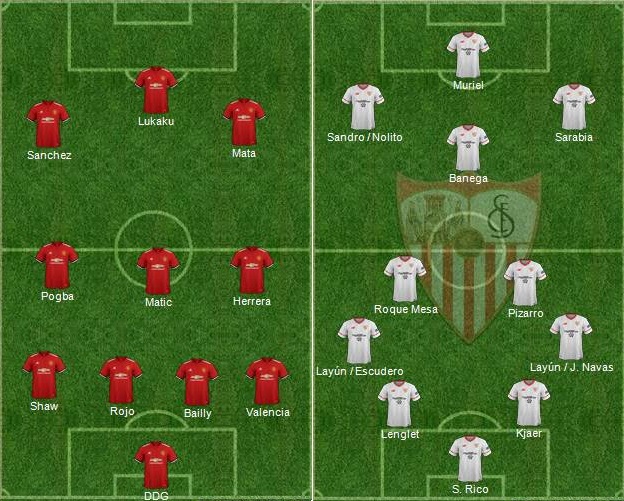 Match Predictions: Its a tough one to predict as United are far stronger on paper but they have not been playing really well since december. However, Jose Mourinho do come up with the results in cup games by hook or crook and I expect another tight game on Wednesday night. United might not win this one but they might have enough quality to go through over the two legs. I am going with a 1-1 draw in the first leg and United to win the second leg, 1-0 at Old Trafford.