Manchester United opened their 2017-18 premier league campaign at Old Trafford against West Ham and boy did they dominate the first 45 minutes. Record signing Romelu Lukaku scored the first goal in 33rd minute after a slick counter attacking move initiated by Matic and big Belgian made it 2-0 after the break with a superb glancing header as United went into cruise mode. United enjoyed as much as 84% possesion somewhere in first half and unlike last season they managed to dispose off the chances.

United played West Ham 5 times over the course of last year and half and they managed three wins and drew the other two games. Last time West Ham defeated United was under Louis Van Gaal at the end of 2015-16 season which resulted in United failing to secure champions league place. However under Jose Mourinho they played three times against West Ham last season winning twice and draw at Old Trafford. Most recent meet between the two clubs was back in January 2017 when United recorded a comfortable 2-0 win at Olympic Stadium in London.

West Ham United 0-2 Manchester United – January 2017
[ English Premier League 2016-17 Match ]
15′ [ Red card ] Sofiane Feghouli was sent off for a rash challenge on Phil Jones inside first 15 minutes.
63′ 0 – 1 Juan Mata scored with a peach of a finish after Rashford’s played him in from left flank.
78′ 0 – 2 Zlatan Ibrahimovic scored from a close range but it was clearly offside.

Team News & Lineups: West Ham are a much better side than their recent results suggest but their away from this season have been woeful to say the least with only three points from opening 6 league games. Jose Mourinho is likely to make several chances in starting lineup after convincing 4-0 win against Feyenoord. We might see Martial or Rashford starting alongside Ibrahimovic while Rooney and Mata to play in attacking roles with Pogba and Herrera playing in central defense. 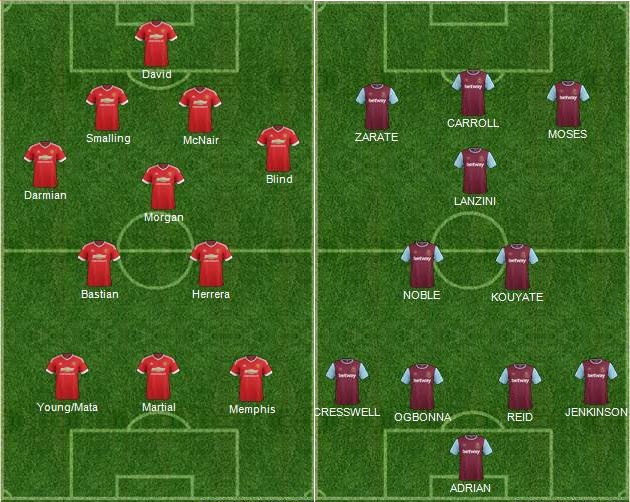 Predictions: United away form has let them down for most part of the season but this is one game they can not afford to drop points. Infect they have much bigger incentive of winning the match as Champions League place will be well within their reach if they can register three points against the hammers. But it has been that kind of a season for United where as soon as it looked like they are putting on a consistant show a surprise defeat followed hindering their chances of climbing the table. I am going with a West Ham win in this one as they will be eager to sign off from their historic stadium.

West Ham 3-2 Manchester United Highlights
[ Premier League, Tuesday, 11 May 2016 ]
10′ 1 – 0 Diafra Sakho scored with a nice finish as he beat Blind to find space inside the box and deflected shot found its way into the united goal.
51′ 1 – 1 Anthony Martial tapped home from close range after Juan Mata beat his marker inside the box and squared the ball in dangerous area where Martial put the final touch on the ball.
76′ 2 – 2 Michail Antonio
81′ 3 – 2 Winston Reid

Marcus Rashford put United 1-0 up in the replay against West Ham United when he beat Tompkins with superb bit of footwork before slotting the ball home at the far post. Amazing goal by what could be a massive talent for United. Anthony Martial’s shot was deflected in the pat of Marouane Fellaini who poked home to make it 2-0 for United and sealed FA Cup semifinal berth. 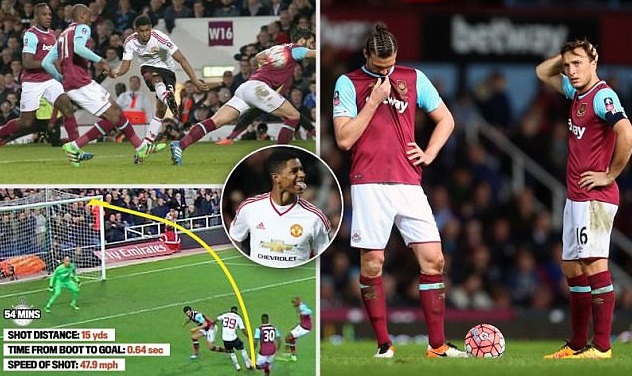 Having played out a 1-1 draw at Old Trafford in the quarterfinal tie against West Ham, United travel to Upton park on wednesday night for the replay. Louis Van Gaal was under massive pressure yet again and his side produce another superb performance where their back were at the wall. Marcus Rashford and Fellaini scored in second half to put Manchester United in the semifinals of FA Cup.

Anthony Martial saved United blushes to keep them in the FA Cup after 1-1 draw against West Ham at Old Trafford in the first leg of their FA Cup quarterfinal tie. Dimitri Payet had given West Ham 1-0 lead with a world class freekick but it was not enough as both teams set to play the replay at upton park next week.

Manchester United took on West Ham in the FA Cup quarter final game on Sunday, 13th March and it turned out another lack luster display at Old Trafford as far as the first 45 minutes were concerned. United started with Rashford, Martial and Jese Lingard and they lacked experience to cut open solid West Ham defense. Hammers did not enjoy most of the possession but they did have couple of great chances to take the league. Dimitri Payet freekick goal and Martial’s equalizer in second half made sure game ended 1-1 on the day.

Dimitri Payet scored an absolute superb freekick to beat De Gea and put West Ham in the semifinals of 2016 FA Cup. Martial enjoyed some great run around on the left flank and he was constant pain for West Ham defense but United failed to convert their superior possesion into goals as both teams went into the break 0-0.