Louis Van Gaal find his team knocked out from the Champions League having lost against Wolfsburg and PSV won their game against CSKA to leave United in third place in the group leaving United Europa League in the Europa League.

Manchester United took the lead early in first half when Martial was put through on goal and he made no mistake in putting the ball in the back of the net within first 10 minutes. But Wolfsburg came roaring back first with Naldo’s first time finish goal and than Julian Draxler makes a superb run and after one-two with Vieirinha he squares the ball back to Vieirinha who taps in to put home side 2-1 up. United equalised through an own goal making it 2-2 but Wolfsburg hit back when Naldo scores to win the game for Wolfsburg.

Both teams already meet earlier in the group stages back in september 2015 and it was a very exciting match at Old Trafford. Daniel Caligiuri put Wolfsburg 1-0 up in just 4th minute of the game but goals from Mata and Samlling either side of the break made it 2-1 for United.

Man Utd vs Wolfsburg Preview:Louis Van Gaal and United of course are severely under pressure even-though they realistically should qualify for next round and might be top of the premier league table by Saturday night. They problem of course is lack of goals but at the back they look solid and pretty decent midfield as well. Wolfsburg on the other hand a very difficult team to play against who likes to press from minute 1 to 90th and United might find themselves with a mountain to climb if they concede early against Wolfsburg.

Team News & Possible Lineups: Manchester United will be without Wayne Rooney for the important champions league game tonight which means we might see Martial, Lingard and Depay playing as front three with Mata, Bastian Schweinsteiger and Morgan schneiderlin playing the in midfield. Darmiel should continue as right back while Marcos Rojo or Daley Blind to start at left back.

United return to Champions League did not pan out as they would have hoped when PSV stunned United coming from behind and winning the match 2-1. While PSV also earned a very respectably 0-0 draw at Old Trafford couple of weeks ago leaving United to go into matchday 5 with a must win game against german side Wolfsburg. 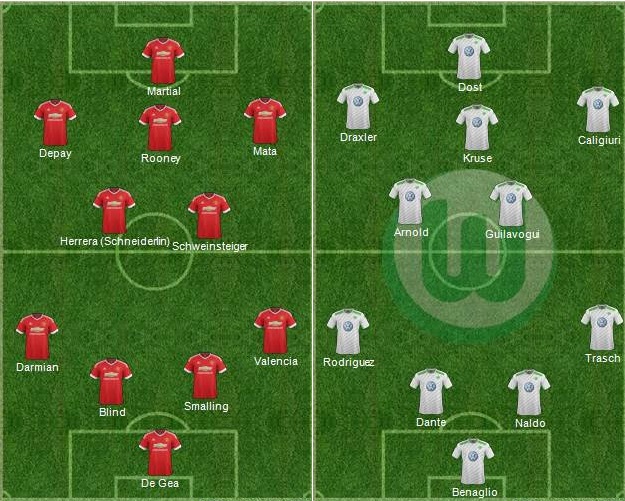 Match Highlights: After the match is finished you can tune in here to find the short match highlights immediately after the final whistle while full match extended highlights should be available in couple of hours after the game.