After losing 3-1 in the first leg of Champions League round of 16 match at Emirates last month, Arsenal visited AS Monaco for the away tie and needing almost a miracle to get through to the next round. Arsenal started the match very strong and took the lead in first half when Giroud scored on a rebound and Aaron Ramsey scored in second half to make last 10 minutes interesting but Monaco manage to hold on to 2-0 scoreline and went to next round with Aggregate score 3-3 but lead on the away goals.

Arsenals first leg encounter cost them the tie otherwise their second leg performance was absolute sensational and they almsot clinched the tie in the second half. Arsenal should be happy with the performance but overall will be disapointed with their first leg disastor which pretty much cost them this tie against a team they sould have beaten in both games. 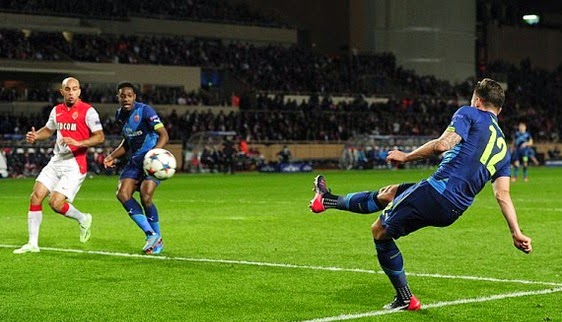 Giroud goal came after constant Arsenal pressure in first half when Monaco keeper stopped a good shot but it fell awkwardly for Giroud who adjusted his body before unleashing a good shot on top corner to make it 1-0 and put beliefe in arsenal.

Second goal came when Theo Walcott struck the goal post with a good shot after Monreal cut back a nice pass inside the box for england man, but a terrible clearance fell for Ramsey who scored with ease to make it 2-0.