Manchester United traveled to tyneside for a away game against Newcastle United at St james park looking for their second win in a row after beating Sunderland at old trafford the last weekend. Louis Van Gaal dropped Rademal Falcao on the bench while Di Maria and Marouane Fellaini started alongside Wayne Rooney in the attack and Ashley Young on the left flank. 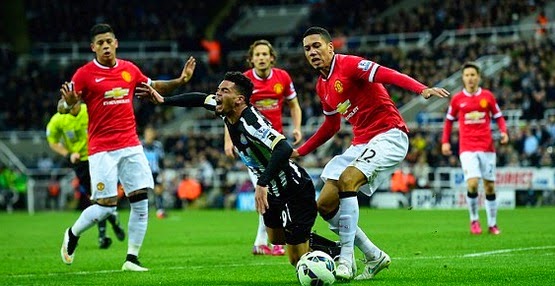 Newcastle United were missing some of their key players but they line up with a 4-4-2 formation with Emmanuel Riviere and Pappis Cisse started upfront. United had so much more possession in the first half than the home side but they never really troubled Tim Krul. While referee also helped them as a certain penalty shout from Newastle was turned down by referee when Smalling brought down Riviere in the box.

Rooney missed a simple chance to make it 1-0 for United and game was 0-0 at the break. After the halftime Di Maria was replaced by Van Gaal and Adnan Januzaj was brought. Just as it looked like game was heading to a 0-0 draw Manchester United pulled a goal from nowhere really, when Rooney chased a hopeless longball and forced a pass back to tim krul who failed to clear it properly under pressure, ball falls to Young who after a superb first touch put the ball in the back of the net to make it 1-0 and all three points.