Arsenal have been in sensational form of late and after their midweek performance against Monaco where they won the second leg 2-0 away from home but crashed out of the champions league on away goals they took on Newcastle United on Saturday, 21st March 2015. Arsenal are in contention to take the second place in the league after City’s form has slumped in last couple of months and they needed to win against Newcastle to keep day light between them and the fourth and 5th place teams in the league.

Arsenal got off to a perfect start when french inform striker Olivier Giroud scored in one of the set pieces where Danny Welbeck’s flick found Giroud in the box who scored with ease to make it 1-0 for the away side at St James Park. 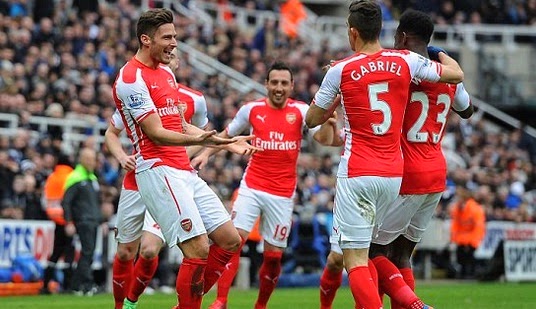 Giroud was at it again 4 minutes later when Santi Cazorla’s floated corner kick was meet by unmarked Giroud who made it 2-0 and it looked liek game over for home side newcastle in just first 30 minutes.

But after the break Newcastle got back into the match with Moussa Sissoko scoring in 49th minute of the match to make things interesting for the remainder of second half. Though Arsenal managed to hang in there and got all important three points when puts them just 1 point behind City with 60 points on the table.