Tottenham traveled to carrow road to face Norwich City in the premier league encounter on tuesday night, 02 February 2016. Tottenham needed a win to stay in touching distance with the title challengers. Tottenham started the game in superb fashion with signing of the season Dele Alli scoring within first 2 minutes while Harry Kane added the second at the stroke of half hour mark and third after the break to win all three points for Tottenham. Watch match highlights of the game right here.

The game started with Tottenham taking the lead inside 2 minutes when inform midfielder Dale Alli found acres of space inside Norwich box after a corner kick mixup and he made absolutely no mistake in giving Tottenham the lead. Spurs looked much the stronger side in the opening exchanges and they could have scored couple more in the first 15 minutes.

Norwich City were left aggrieved with the penalty decision awarded when Bassong seem to have brought down Dale Alli in box who was getting closer to score from a rebound. Kevin Friend awarded the penalty and Harry Kane continue his superb run of form scoring from the spot. 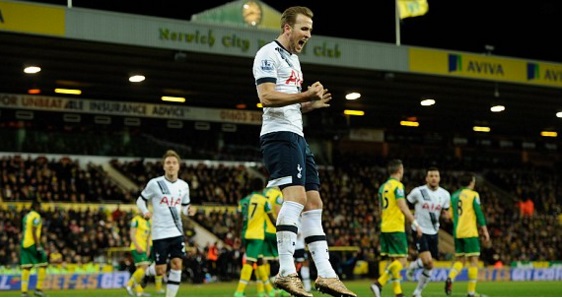 Team Went into the break with tottenham leading 2-0 and Norwich had a massive task ahead to find their way back into the game. If game were to finish like this Tottenham would go into the fourth place ahead of Arsenal who were drawing 0-0 against Southampton in the other match.

Tottenham managed to hold on to their 2-0 lead in the second half and now sit fourth in the table equal on points with Arsenal who are fifth only on goal difference. Tottenham trail Leicester City by 5 points but they are still 5 points ahead of United for the fourth place finish.