Portugal scrapped past group stages, just barely and they face Croatia in the first knockout tie a team which has impressed the most in the tournament so far. Croatia went into the game heavy favourites but Portugal hanged in there for most part of the match and both teams played out a 0-0 draw till the normal 90 minutes. As we went into the extra time it became anybody’s game and Portugal had a better chance with goalscorer like Ronaldo in their ranks. It took 116 minutes to finally break the deadlock and it was Portugal who scored with Ricardo Quaresma popping up a goal after coming on as substitute.

Portugal and Croatia played out a 0-0 draw in the first 90 minutes and both teams pretty much canceled each other out for most part. Quaresma scored with first shot on target for Portugal with just 3 minutes remaining on the clock before the penalty kicks. Portugal will now play Poland in the quarterfinals.

Portugal struggled throughout the group stages having drawn all three of their games and barely made it to the knockout stages. 1-1 draw against Iceland was followed by 0-0 result against Austria followed by high scoring 3-3 game against Hungary. Croatia on the other hand played absolute class football for best part of 270 minutes in the group stages and their only downer was last 15 minutes against Czech when they conceded two late goals to lose their 2-0 lead.

Croatia is likely to be without Luka Modric who got injured against Czech in second group game but Croatia will take heart from the fact they defeated defending champions Spain in last group game without him. Milan Badelj and Marko Rog are expected to start in central midfield roles.

Portugal has played attacking football so far but results did not go according to the plan. We can expect coach Fernando Santos to make a few changes specially in the back four and midfield to put more steal while defending. Andre Gomez is a big doubt while Ronaldo, Nani should keep their places upfront. 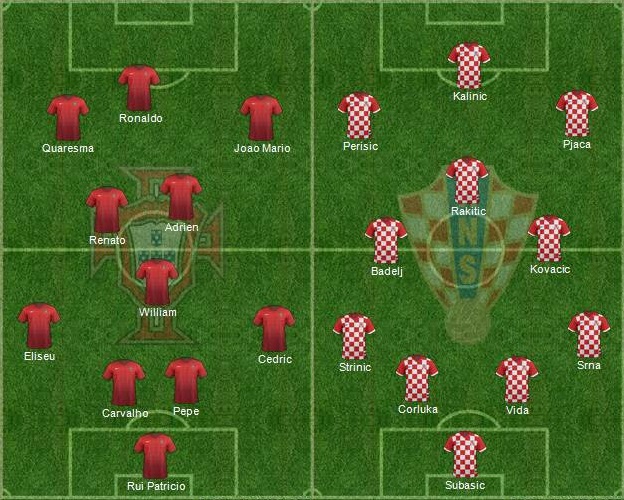 Match Predictions: Its hard to see how Portugal can get a result against highly rated and confident Croatian side on Saturday. Alot depend on Ronaldo and his goal scoring powers who has scored just 2 goals with the most number of shots in group stages. Croatia has some clinical players upfront specially Perisic who has been the best player in the group stages. With dodgy defense Portugal will find it hard to cope with Croatian attack and I am going with a comfortable win for Croatia in this one.