Karim Benzema and Cristino Ronaldo rips through Malmo defense to secure a impressive 6-0 win at Santiago Bernabue on tuesday night. Real madrid had already qualified for the knockout stages as group winners and they started with some of the fringe players in the squad. Mateo Kovacic, Casemiro and Nacho Fernandez were the few names to get rare starts. It was Benzema who started the rout with two goals in side 2 minutes before Ronaldo took over and scored 4 goals to make it 6-0 and reach 88 goals in Champions League.

Karim Benzema who started the game for Real Madrid after missing out couple months action showed what Real madrid were missing as the pokes him first of his two goals. 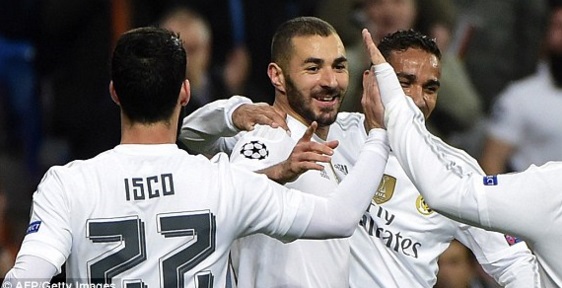 He was on target again in 24th minute when Ronaldo produced a superb through ball to send Benzema clear who makes no mistake in putting the ball in the back of the net.

There was alot of talk about Ronaldo and his inability to score from free-kicks well he showed what he can do with a thumping freekick at the far post to make it 3-0 for Real Madrid.

Real Madrid went into the break with 3-0 lead and you would think Rafa Benitez will give Ronaldo some rest but three time fifa player of the year scored two more goals just after the break to complete his hattrick and earns himself yet another record of 10 goals in champions league group stage. never been done before!

He was not done yet as he scores another in 59th minute when Isco found him with a superb cross and Ronaldo headed home his fourth and Real madrid’s sixth of the night.

Youngster Mateo Kovacic made it 7-0 for Real Madrid in 70th minute of the game to end Real madrid’s champions league group stage campaign on a high.