Real Madrid returned to league football after a weeks international break and fans wanted a reaction after that last months defeat against FC Barcelona. Real Madrid took on Granada in the La Liga game this Sunday afternoon at Santiago Bernabue and although everybody expected them to win but they produced a performance of the season and ripped Granada apart throughout the game.

Gareth Bale started the scoring with a neat goal in the 25th minute and than Ronaldo took over as he scored 3 goals in less than 8 minutes and completed his hattrick. Real MAdrid went into the break with 4-0 and three points in the bag but after the break Real Madrid kept on playing superb football and ronaldo scored two more while Benzema added another two and a own goal which made it 9-1 for Real Madrid the biggest result for them this season. 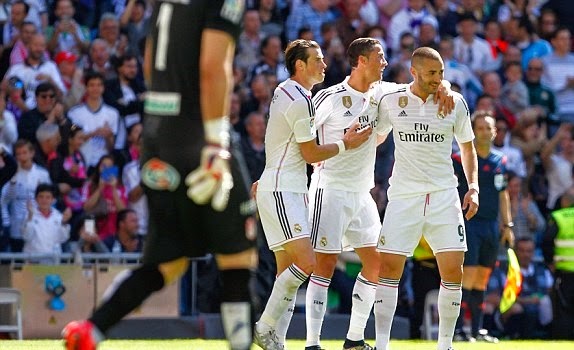 This win puts Real Madrid just one point behind Barcelona in the league standings and Barca will be playing later tonight. Ronaldo on the other hand scored 5 goals and now overtakes Messi to first place with total 36 strikes in La Liga this season, Messi has 32 goals to his name.