Real Madrid are set to play their first game in the FIFA Club World Cup match on Wednesday night, 13th December 2017 at the Zayed Sports City Stadium in Abu Dhabi. The winner of this match will qualify for the Club World Cup final which will be played at the same venue against Brazilian side Grêmio who qualify for the final after beating Pachuca, mexican side. Madrid vs Al Jazira is set to start at around 21:00 local UAE time / 18:00 CET / 17:00 uk time.

Real Madrid vs Al Jazira will be broadcasted live in the US on spanish channel “Telemundo Deportes” and “FuboTV” while there won’t be any official live coverage of the Club World Cup in the UK. But UK viewers can always catch the action live via FIFA’s official youtube channel.

Team News & Lineups: Real Madrid have taken their full squad for the Club World Cup and we can expect Zidane to start with full strength side hoping for a win in what should be a cracking game of football. Real Madrid have struggled to get going this season but this competition not only give them a chance to get back in form but also get away from sheer competition in Europe and rejuvenate the players going into the important league game against FC Barcelona straight after the go back to Spain.

Real Madrid are set to start with Ronaldo, Benzema and Lucas Vazquez upfront while Kroos, Casemiro and Isco to start in central midfield roles. Carvajal, Ramos, Verane and Marcelo to continue as back four with Navas in goal. Al-Jazira are a decent side who can play decent football but playing Real Madrid is a step too far and they will be happy with a good performance and not a big defeat. 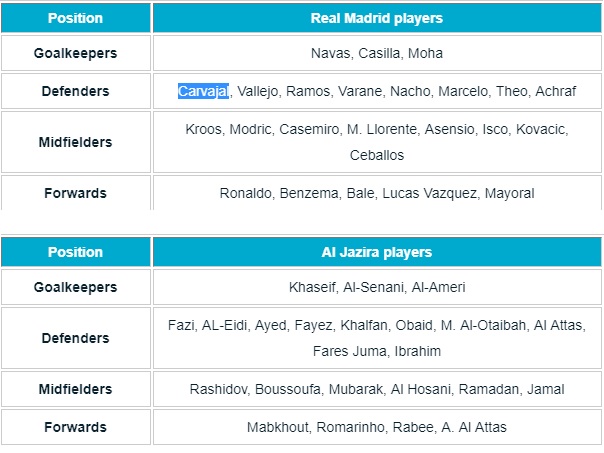 Hard to see anything but a convincing Real Madrid win who have won this competition twice in last three years. Zidane will be hoping to complete a hattrick of wins in this tournament and go back to Spain with full of confidece as they take on FC Barcelona on 23rd December 2017.