Real Madrid hosted Bayern Munich in the second leg of their 2017 UEFA Champions League quarterfinal match on Tuesday night at Santiago Bernabue. Madrid were pretty much outplayed in first half by Bayern but they failed to score. However Lewandowski penalty goal in second half brought them back into the tie. Ronaldo scored late in second half to put Real Madrid back on level terms but a minute later Ramos own goal gave Bayern the 2-1 lead and tie was back on level terms. Vidal was sent off harshly for second yellow and Ronaldo scored twice in extra time as Madrid sail to 3-2 win and book their place in semifinals.

Cristiano Ronaldo brace ensure a 2-1 win for Real Madrid at Allianz Arena in first leg. Bayern Munich’s Vidal scored the opening goal but missed the penalty later in first half which might prove costly.

Bayern Munich 1-2 Real Madrid – 1st Leg
[ UEFA Champions League 2017 – Quarterfinal]
25′ 1 – 0 Arturo Vidal scored with a thumping header in 25th minute on a corner kick to put Bayern Munich in lead.
45′ (Penalty miss) Arturo Vidal missed a penalty to double Bayern’s lead just before the halftime.
47′ 1 – 1 Cristiano Ronaldo cancels out Vidal’s opener at the start of second half.
61′ [ Red Card ] Javier Martinez was sent off for his second yellow.
77′ 1 – 2 Cristiano Ronaldo won the game scoring his and Real Madrid’s second of the night and put them in driving seat going into the second leg.

These two meet back in 2015 pre-season in the Audi cup where Robert Lewandowski’s solitary goal gave Bayern 1-0 win and we can expect another close encounter this Wednesday night. ESPN will have live coverage in the US while SkySports 1 will broadcast the match live in the Uk.

Match Preview & Team Lineups: Real Madrid lost against Paris Saint Germain in the opening pre-season game but they produced a superb 3-2 win over Chelsea last weekend. Zidane will be without several key players including the likes of Ronaldo, Bale, Toni Kroos and Navas while Karim Benzema is also ruled out due to minor injury. Which means Alvaro Morata is set to start upfront with Luka Modric, Casemiro, James Rodriguez, Isco and Mateo Kovacic playing in packed midfield.

Bayern Munich on the other hand will be without Manuel Neuer, Robert Lewandowski, Arjan Robben, Thomas Muller, Renato Sanchez, Jerome Boeteng. But they still have solid starting lineup which can cause problems for Real Madrid. 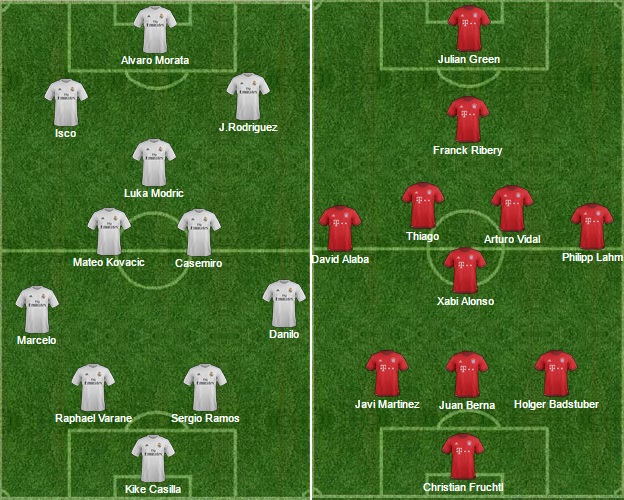 If you missed the live action you can always tune in here after the game to watch full match extended replay which is usually available 15 minutes after the game is over.

What to expect ? Real Madrid are playing their last friendly before they start their 2016-17 competitive season against Sevilla in the UEFA Super Cup game scheduled next week. We can expect Zidane to put emphasis on keeping the team shape and playing with purpose. Should be an entertaining game with loads of goals and I cam going with Real Madrid to just shade it narrowly.