Real Madrid are set to take on Brazilian side Grêmio in the final of 2017 FIFA Club World Cup which will take place at the Shiekh Al-Zayed international stadium in Abu Dhabi on Saturday, 16th December 2017. Having beaten home side Al-Jazira in the semifinal couple of days ago, Real Madrid qualified for the final and will be looking to win this tournament for the third time in last 4 years. Gremio beat Pachuca in the semifinal and qualified to face Real Madrid in the final. The final will start at around 21:00 Local / 18:00 CET / 17:00 uk time and beIN Sports will have live coverage in the middle-east in both English and Arabic commentary. If you missed the live action, you can always tune in here for full match highlights afterwards.

The match will be broadcasted live on beIN Sports channel 11 in English and also in arabic in most of the middle-east and african countries. In the US, viewers can tune in to Spanish channel called “Telemundo Deportes” to get the live action while “Fubto TV” will have official live streams only available to US IPs. There won’t be any live coverage in the UK but UK viewers can always tune in on Goal.com facebook page who will be streaming it free for UK viewers.

Zidane is expected to start with Ronaldo, Benzema and Gareth Bale in the final with Isco, Toni Kroos and Casemiro playing in central midfield roles. Ramos might start in the final having been rested in the semifinal, alongside Verane. While Dani Carvajal and Marcelo to start as fullbacks.

Gremio on the other hand are more than likely to keep the unchanged lineup which defeated Pachuca few days ago with Jailson playing upfront on his own while Lucas Barrios and Fernandinho playing in attacking roles. Below are the full squads of both teams for the final. 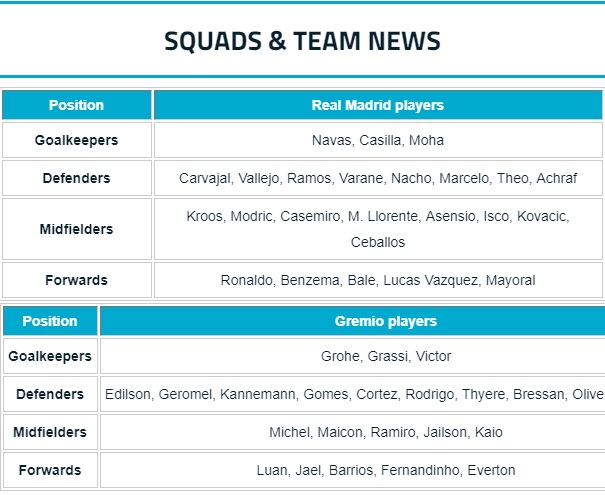 Match Predictions: Real Madrid are set to take on Gremio in the final and on paper its hard to see Real Madrid getting any trouble to win the third consecutive FIFA Club World Cup. However their performance against Al-Jazira and overall results this season have been way below par and Gremio might fancy their chances if they can frustrate Real Madrid for longer period of times in the game. However, Madrid have too much about them to get beat on Saturday, im going with a comfortable 3-1 win for Real Madrid in this one.