Real Madrid are set to take on Malaga in the Spanish La Liga game on Saturday afternoon, 25 November 2017 in what should be a cracking of a game at Santiago Bernabue. Having fallen 10 points behind Barcelona, Real Madrid must win this game to put some pressure on Barcelona who play Valencia later in the week. Madrid vs Malaga kicksoff at around 16:15 CET / 15:15 uk time and beIN Sports will have live coverage in the US and middle-east. We will have match highlights of this game after the match.

Malaga are one of the four sides in Spain who has yet to win a game away from home which pretty much represent easy three points for Real Madrid and they will go into the game odds on favourites. But the game is not played on paper and in recent couple of performances of Real Madrid players shows Club World Cup hangover. Ronaldo has been criticized for his lackluster performances but he is getting their in terms of match fitness. He needs a good game to get back on track.

Real Madrid have massive injury and suspension worries ahead of the game with Gareth Bale, Pepe both out injured and Verane will sit out of the game due to red card suspension. James Rodriguez and Marcelo both doubtful but likely to risk playing in the game. Malaga on the other hand will start with Cop and Charles upfront with four man midfield of Camacho, Tissone, Juanpi and Fornals. This is how I expect both teams to lineup on saturday. 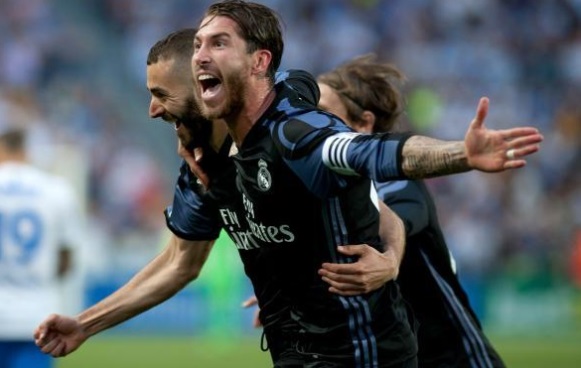 Last time these two meet was back in May 2017 when Real Madrid ran out comfortable 2-0 winners thanks to goals from Ronaldo and Benzema as Madrid clinched the 2016-17 Spanish La Liga title.

Malaga 0-2 Real Madrid – May 2017
[ Spanish La Liga 2017 Match ]
2′ 0 – 1 Cristiano Ronaldo was sent through on goal by Isco’s wonderful throughball and he rounded off the keeper to score Madrid’s first of the night.
55′ 0 – 2 Karim Benzema made 2-0 and with that secured three points but most importantly wraped up Real Madrid first La Liga title in 5 years.

Match Predictions: This is the time where teams in the bottom half start to put extra bit in the games and make it difficult for top teams to score against. Malaga need to put together a consistant run from now to the end of the season if they were to qualify for European football. I expect a tight game with Real Madrid coming on top with a odd goal. I am going with a 2-1 win for Real Madrid and would love to know your take on the game. Use the comments below to shout out your predictions.