Real Madrid take on Manchester City in their second pre-season friendly game on Wednesday night, 26th July 2017 set to be played at the Los Angeles Memorial Coliseum in Los Angeles. Real Madrid will be looking to boost their players fitness before they take on Barcelona couple of days after this game while City need to put together a good performance with their preferred first team to analyse where they stand going into the new season. We will have live streams as well as match highlights of this game right here on this page.

After playing out a 0-0 drawa at Etihad Stadium Manchester City traveled to Santiago Bernabeu to face Real Madrid in the second leg of champions league semifinal and they were dealt an early blow when captain Vincent Kompany had to be withdrawn with injury and Real Madrid scored in 20th minute when Gareth Bale’s deflected shot found its way in the back of the net to make it 1-0 for Real madrid. Man City struggle to get grip of the game for most of the first half but game was nicely poised as we head to halftime.

Real Madrid hold on to their narrow lead and won the tie 1-0 over two legs qualifying for their 14th European Cup final which will be played on Saturday, 28th May 2016 in Milan, Italy.

Real Madrid looked stronger and fresher of the two teams in the opening half and they enjoyed so much space in final third on either flank and thats where they goal came from. City are still in the game as they just need to score 1 goal to go ahead on aggregate away goal. 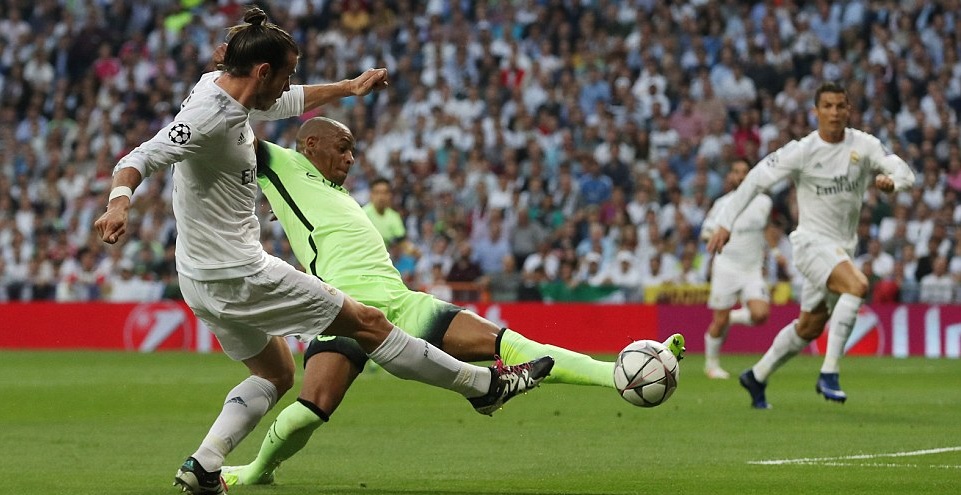 Manuel Pelligrini side Man City qualified for the semifinals after seeing off the challenge from Paris Saint-Germain in the quarterfinal double header. But they face the biggest challenge as 10-time european champions Real Madrid visit Etihad Stadium for what will be the historic night for manchester club. Los Blancos as they they are known, defeated Wolfsburg in the previous round and have a wonderful oppertunity of reaching yet another european final and should go into the tie as favourites specially since they are playing the second leg at home.

Aguero holds to the key for City’s chances while Ronaldo will look to break yet another record by adding to his 16 goals so far in the competition.

Team News & Lineups: Man City will be without Yaya Toure who will miss the first leg and quite possibly the visit to Spain as well due to thigh injury. However City has a good news in Vincent Kompany who is fit to start for Man City which means he is likely to start alongside Mangala with Cliche and Zabaleta playing as fullbacks.

Real Madrid on the other hand were sweating over the fitness of Ronaldo and Benzema but both have recovered and should start alongside Gareth Bale in three man attack while Modric, Kroos and Casemiro are set to start in central midfiel roles. This is how I expect both teams to lineup on Tuesday night. 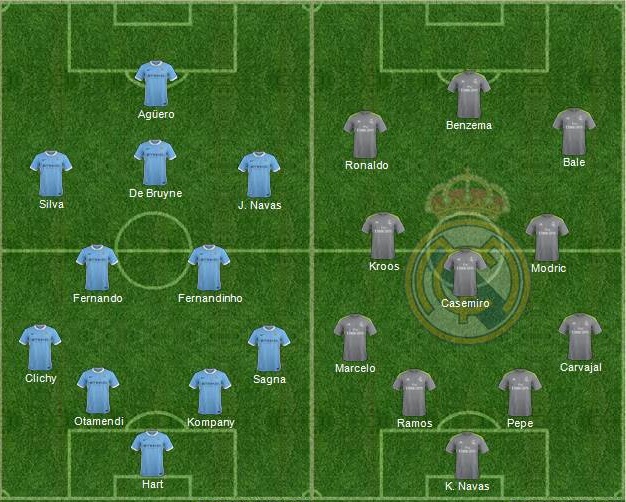 Ronaldo less Real Madrid looked nervous in the opening exchanges but they kept City’s front trio pretty much in check and never gave them any clear opportunity at goal. Sergio Ramos and Pepe both used their physical presence and frustrated Man City with some hard tackles throughout the first half.

Gareth Bale looked like the only threat Real madrid posed for best part of first hour while Benzema and Lucas Vazquez struggled to impose themselves on the game.

The best chance of the game fell to Pepe who was in acres of space inside the box when a ball fell for him nicely and his left footed strike was straight at City’s goalkeeper Joe Hart who made himself big to keep the game at 0-0.

Real Madrid took on Manchester City in the first leg of their 2016 Champions League semifinal at Etihad Stadium this Tuesday night and it turned out to be a very tight and competitive game between the two sides. Madrid lost Ronaldo before the kickoff as he failed to pass fitness test and Man City dominated the game without really troubling Keylor Navas. The game was 0-0 at the break and both sides looked happy even if the score stays the same and thats how the game ended with a 0-0 draw and both teams have all to do in return leg in a weeks time.