Real Madrid host Sevilla in the Spanish La Liga game on Saturday, 09 December 2017 at Santiago Bernabue. Its a huge game game for Real Madrid who will be visiting UAE after this game to take part in FIFA Club World Cup. They must win this game to keep their slender hopes of catching Barcelona who they play after returning from Club World Cup on 23rd December 2017. Sevilla on the other hand are a quality team and they can cause Real Madrid all sorts of problems. The game kicks off at around 16:15 CET / 15:15 uk time.

Preview & Team news: Zidane’s men visit United Arab Emirates as they play FIFA Club World Cup in a hunt to win their first silverware in the this season but before that they need to play a massive league game against Sevilla on Saturday afternoon.

Zidane’s will have Ronaldo, Benzema fit and ready to start upfront while Gareth Bale is expected to miss out as he is still removing from the injury he suffered earlier in the season. Sevilla on the other hand has full squad to choose from and they will pose a real threat to this Real Madrid side who are currently 38 games unbeaten in all competitions. 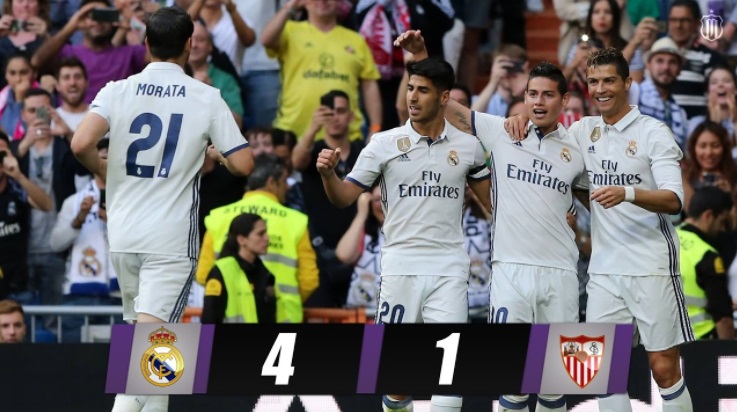 Last time these two teams meet was back in May 2017 when Real Madrid had to win this game against Sevilla to ensure their 2016-17 La Liga title. They did just that with Nacho, Ronaldo (2) and Kroos on target in 4-1 win sealing the La Liga title for Real Madrid.

Real Madrid 4-1 Sevilla – May 2017
[ Spanish La Liga 2017 Match ]
10′ 1 – 0 Nacho Fernandez put Real Madrid in lead in just 10th minute of the game in what was a title defining match.
23′ 2 – 0 Cristiano Ronaldo scored in 23rd minute to put Madrid in command in this important game.
49′ 2 – 1 Stevan Jovetic scored just after the break to put Sevilla back into the game.
78′ 3 – 1 Cristiano Ronaldo scored again late in second half to pretty much settle the tie and not only secure three points but also the La Liga title.
84′ 4 – 1 Toni Kroos made it 4-1 with a late strike to put some gloss on the win.

Preview Match Revivews: Zidane have some selection headech for Saturdays game as both Ramso (Red) and Pepe (5 Yellow cards) are suspended while Karim Benzema is also out injured. Nacho and Varane are set to start in defense while Marcelo will get a starting role replacing Arboloa. Ronaldo, Gareth Bale and James Rodriquez are set to start upfront with Kroos, Modric and Casemiro to play in central midfield.

Unlike Madrid, Sevilla were in action during midweek for their Europa League commitments and that might prove key with home side getting more rest and fresher of the two teams. Captain Ever Banega is suspended while Vitolo and polish midfielder Krychowiak are both out injured. This is how I expect both teams to lineup on Saturday. 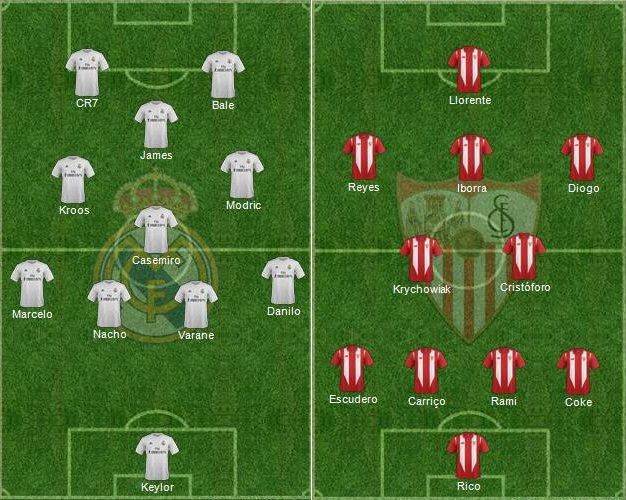 Predictions: It has been a strange season for Sevilla who has experienced absolute beast form at home having only drop points in two games while they are the only side in top 5 european league’s to not have won away from home this season. Thats right zero away win and they are still in with a chance to qualify for Champions League if they can put together a decent run from now to the end of the season. Can they finally break their away win duck against Real Madrid ? I don’t think so, I am going with a comfortable 3-1 win for Real Madrid. 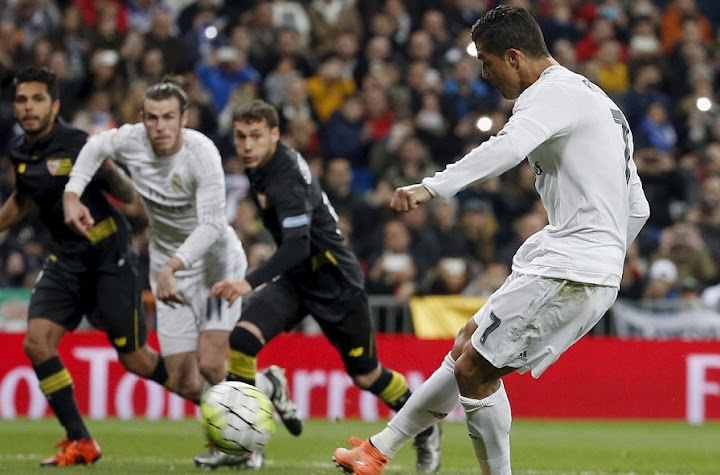 Real Madrid and Sevilla produced a cracking game of football on Sunday night at Santiago Bernabeu. Madrid took the lead through fit again Karim Benzema who scored just in sixth minute against a brave Sevilla side who took the game to Real Madrid. Unlike the previous few home games it was a very open end to end game where both teams had chances to score. Sevilla did get a golden opportunity to score when they were awarded a penalty but Kevin Gameiro missed from the spot. However Real Madrid hammered Sevilla in second half with Ronaldo and Bale scoring within a minute of each other.