Serbia are set to take on Switzerland in their second group game on Friday, 22 June 2018 in a game where Serbia can secure their place in the knockout stages of the tournament with a win. Switzerland drew their opening game against Brazil and they will pose a bigger threat to Serbia, they faced against Costa Rica. It will be interesting to see how both teams setup for this important game.

Serbia vs Costa Rica Match Preview: Serbia are a very solid team, at least on paper and they have some quality players in the middle of the park with the likes of Matic and Milinkovic-Savic to pull the strings from midfield while in Aleksandar Mitrovic and Adem Ljajic they have proper goal threat going forward. A very experience back four with the likes of seasoned veterans in Aleksandar Kolarov, Branislav Ivanovic, Matija Nastasic and Milos Veljkovic.

Costa Rica on the other hand lack cutting edge which was so evident in their two friendly games against England and Belgium. They will have to rely on Bryan Ruiz and Joel Campbell upfront who do complement each other well but they are not known for prolific scoring rates. Their defense and midfield lacks presence and that is where Serbia are likely to hurt them although they do have 3 time champions league winner Keylor Navas in goal.

This is how I expect them to lineup on Sunday afternoon in Samara. 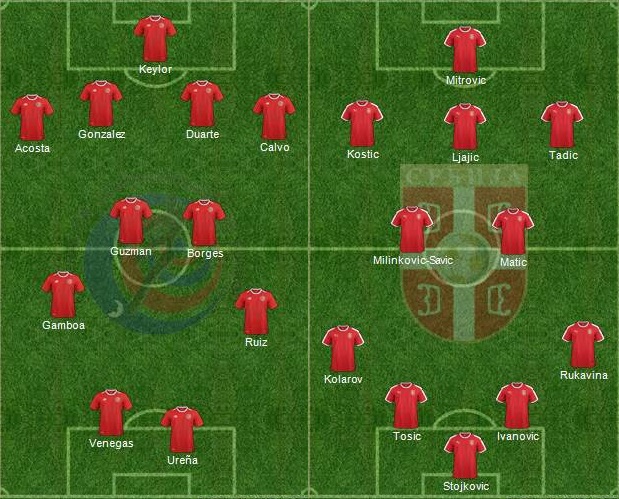 Match Predictions: Its hard to see Costa Rica getting anything out of this match against a very solid looking Serbia side who can go far in this tournament. However, so far this World Cup has produced quite a few results people thought would go otherway around. But considering all things, I am going for a comfortable win in this one for Serbia also I have them favourites alongside Brazil to qualify from this group.