Spain took on Croatia in a bid to qualify as group winners and they would achieve that with a draw while Croatia needed a draw as well to confirm their place in the round of 16. Spain as expected started stronger and took the lead in just 7th minute when hotshot Alvaro Morata scored to make it 1-0. For best part of first 45 minutes Spain looked the better side and should have increased their lead. Croatia however hit back when Nikola Kalinic scored just before the break to even things up. Sergio Ramos missed penalty ended up costing Spain three points as Ivan Perisic score late to make it 2-1 and top the group D

Spain 1-1 Croatia
[ European Championship 2016 ]
07′ 0 – 1 Alvaro Morata scored in just 7th minute to put Spain 1-0 up and the goal was a typical spanish move with David Silva finding Cesc Fabregas inside the boxing with sublime through ball who squares it for Morata.
45′ 1 – 1 Nikola Kalinic equalized just before the break with a near post header to make it 1-1 on the night.
72′ 1 – 1 (pen.) Sergio Ramos missed a penalty for Spain (Luka Modric looked to have advice keeper which way Ramos is likely go)
87′ 2 – 1 Ivan Perisic scored after a superb counter attacking moves but De Gea should have done better to save the low near post shot which took slight deflection on its way.

Short Preview and Expected Lineups: Nouveau Stade Bordeaux will be the setting when two of the best teams in the competition take on each other. Croatia has been absolute superb in their opening game and a half only downer was conceding two late goals to drop points against Czech Republic which was largely down to crowd trouble. Spain on the other hand has set the bench mark with two very commanding performances with some quality football and it will take some stopping to half Spain’s charge to defend their title.

Spain coach Vicente Del Bosque is expected to make several changes in the starting lineup having already secured their place in the knockouts. Iker Casillas might be given a start while Thiago Alcantara and Pedro Rodriguez are also in contention. Croatia on the other hand might be forced to make changes as Luka Modric is struggling with groin problems and likely to be given extra rest while rest of the team should be the same. 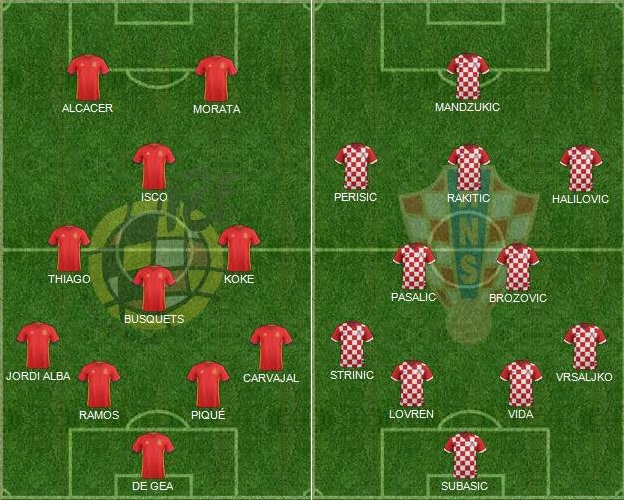 .
Predictions: Croatia has only beaten Spain on one occassion in the six meetings between the two and that was back in 1994. While Spain won their only meeting in major competition back in Euro 2012. Spain are kings of Europe if we take into account their recent run in the European Championship where they have put together a 14 game unbeaten run winning 11 of them. Croatia should cause problems for Spain but defending champions has too much quality to drop points here. I am going with a 2-1 win for Spain.