Manchester United are set to take on Stoke City in the last premier league game this weekend taking place on Monday, 15th January 2018 at Old Trafford. This is a game which will give United a chance to go three points clear from third place and since City are playing Liverpool, they might drop points creating oppertunity for United to reduce the gap at top of the table. The match will be played at around 20:00 uk time and we will have live links and match highlights right here on this page.

Manchester United 2-0 Stoke City Highlights
[ Premier League 2017-18 Match ]
09′ 1 – 0 Antonio Valencia scores an absolute belter after cutting inside and unleashing a fine curled shot at far post.
38′ 2 – 0 Anthony Martial made it 2-0 for United with another absolute peach of a finish from edge of the box.

Manchester United vs Stoke City – Premier League 2017-18 Match
Date: Monday, 15th January 2018 – Time: 20:00 uk time
TV Channels: SkySports (UK), NBCSN (US)
Highlights: If you missed the live action, you can always tune in here for full match highlights after the game is over. We have goals video and extended BBC Motd footage later in the night.

Manchester United are set to visit Stoke City in the premier league game on Saturday, 09 September 2017 at Bet365 stadium after the international break. Manchester United have a wonderful chance of not only retaining their place at top of the table but they might also stretch the lead if the chasing pack drop anymore points. Having won first three premier league games United will go into the game as favourites to win all three points however Stoke City do have a knack of picking up points against the big boys. The game is scheduled to kickoff at around 17:30 uk time and BT Sports will have live coverage in the UK.

Stoke City 1-2 Manchester United Highlights
[ Premier League 2017-18 Match ]
43′ 1 – 0 Eric Maxim Choupo-Moting tapped home from close range after a swift counter attach allowed Stoke to put United on the back foot.
45′ 1 – 1 Marcus Rashford scored what was a lucky goal after Pogba’s header bounced of Rashford into the back of the net.
58′ 1 – 2 Romelu Lukaku made it 2-1 on the day after he was put clean through on goal by Mkhytaryan and after missing his first shot he managed to scored with a rebound effort.

The game is suppose to kickoff at traditional saturday evening slot at 5:30pm uk time and match highlights of Manchester United vs Stoke will be available after the game. Goals video and short highlights are usually available immediately after the game..

Jose Mourinho side has won all three of their league games so far this season and we can expect them to make it four out of four as the club football resume after hectic international break. Stoke City did frustrate United the last time these two meet back in January 2017 when United had to dig deep with Rooney scoring a late equalizer. 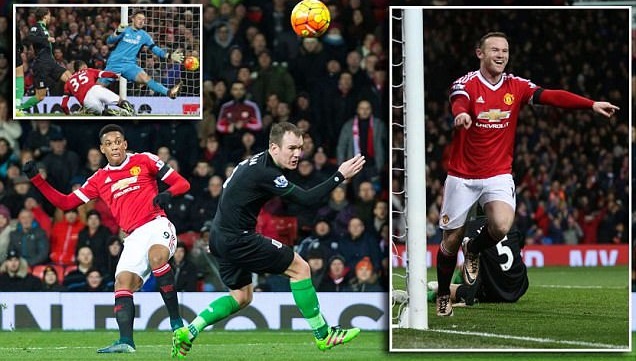 Stoke City 1-1 Manchester United – January 2017
[ English Premier League – 21 January 2017 ]
19′ 1 – 0 (Own Goal) Juan Mata tried to block Eric Pieters cutin but the ball deflected off Mata and De Gea in the back of the net.
94′ 1 – 1 Wayne Rooney produced a sublime freekick late into the injury time as they snatched a point away from home. He becomes United’s all-time top goal scorer.

Preview & Team News Mourinho surprisingly fielded a very strong side against Zorya in midweek Europa League game. Only changes were made in midfield and defense. However we can expect Mourinho to start with Herrera, Pogba in central midfield roles on Sunday Juan Mata to play in no.10 role alongside Rahsford and Lingard while Ibrahimovic to start upfront

Stoke City has started the season in woeful form and yet to register a win so far but Manchester United clash get them an opportunity to do just that and turn their season around. 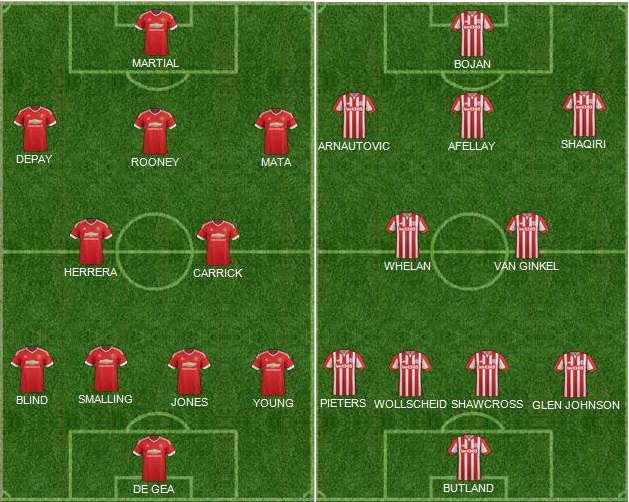 Predictions: Manchester United can not afford to drop points against Stoke City and we can safely assume that if they were to drop points on tuesday night it won’t be long before Mourinho is incharge of United. I am going with a narrow 2-1 win for United with martial getting on the score-sheet.