Liverpool traveled to face Sunderland at Stadium of light on Monday afternoon just after 45 hours beating City on New Years eve. Liverpool had a massive chance of going within just three points of Chelsea by winning the game against Sunderland but they started on back foot as Sunderland looked more sharper. However it was Liverpool who took the lead thanks to Sturridge header but Jermain Defoe equalized minutes later from penalty spot. Sunderland had couple of good chances before the break and Liverpool were lucky to go into the halftime at level terms.

Sunderland 2-2 Liverpool Highlights
[ English Premier League 2017 Match ]
19′ 0 – 1 Daniel Sturridge opened the scoring with a lucky looping header as Sunderland defence went to sleep on a regular corner kick routine.
25′ 1 – 1 Jermain Defoe scored from the spot to make it 1-1 after Ibrahim Didier Ndong was brought down inside the box.
72′ 1 – 2 Sadio Mane
84′ 2 – 2 Jermain Defoe

Preview: Sunderland were hammered 4-1 by Burnley on 31st December and David Moyes describe that performance as the worst defensive display of any team he has been charge. Sunderland find themselves 2 points away from 17th place Crystal Palace and they need something out of this game to get back on track.

Liverpool however could not have asked for a better start to the league and now they have opportunity of going just within three points of Chelsea and put pressure on Antonio Conte’s men who themselves travel to face Tottenham on Tuesday, 04 January 2017.

Last time these two meet was back in November when Liverpool came out 2-0 winners at Anfield and we can expect another similar scoreline.

Team News & Lineups: Liverpool has played 8 games in January and they already played one in February making it 9 games in space of 29 days and Klopp has number of injury worries going into the important home game against Sunderland. Sturridge, Skrtel and  Origi are sure to miss this weekend’s game but there is slight chance of Philipe Coutinho getting fit for Sunderland clash but he might not feature in starting lineup.

Sunderland on the other hand are likely to go with Jermain Defoe in attack alongside former Liverpool player Fabio Borini while Jeremain Lens is likely to miss the clash alongside Yann M’Vila. This is how I expect both teams to lineup on saturday. 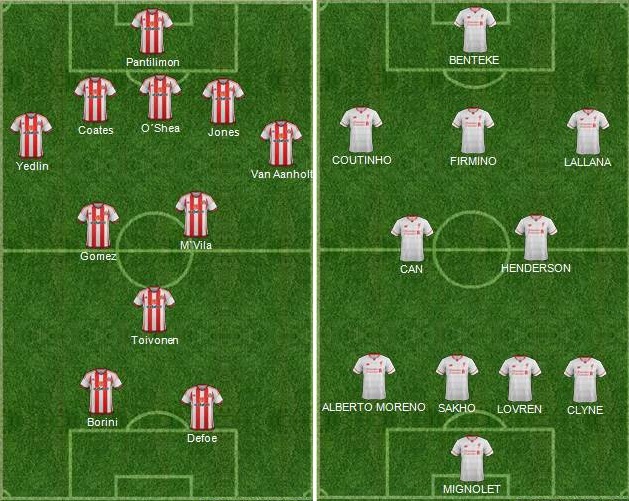 Match Predictions: Liverpool need to win this game to keep themselves in running for the European places but their form has been unpredictable under Klopp as they can blow hot and cold on any day. Sunderland will be motivated for this clash as a win will get them just within a point of Norwich who are 17th in the table. I am expecting a typical english game here with fast paced football and loads of chances, I just think Sunderland with Defoe in their lineup might be able to convert better than Liverpool so I am going with a 2-1 win for Sunderland in this one.

Liverpool 2-0 Sunderland Highlights
[ English Premier League 2016-17 ]
45′ [ Haltime Report ] Liverpool had to deal with Coutinho’s injury as he wobbled off with what looked like a severe ankle issue. Apart from that Sunderland kept themselves compact at the back and made it difficult for Liverpool.
75′ 1 – 0 Divock Origi late in second half to put Liverpool in 1-0 lead and that proved to be enough to get them all three points.
90′ 2 – 0 James Milner

Sunderland started the game with defensive mentality and found it very difficult to hold on to ball with Liverpool dominating the possession 75% to Sunderland around 25%. Though Liverpool failed to take their chances in first half but after the break game opened up when Milner found Firmino inside the box with a far post cross and Brazilian put the ball in the back of the net to make it 1-0.

Firmino turned provider for second Liverpool goal as he squared a decent ball inside the box for Lallana who tapped home Liverpool’s second of the day. 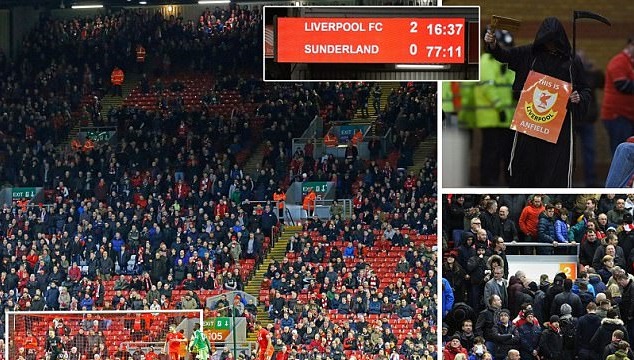 Liverpool took on Sunderland at anfield on saturday, 3 pm kickoff with Jurgen Klopp opting with a packed midfield of Joe Allen, Henderson, Emre Can, Milner and Adam Lallan while Firmino played upfront on his own. Sunderland made it difficult for Liverpool to break them down and the game was 0-0 in the first half. But after the break Roberto Firmino and Adam Lallan scored goal a piece to make it 2-0 for Liverpool but two late goals from Adam Johnson and Jermain Defoe earned valuable 1 point for Sunderland.