Arsenal hit the woodwork on no less than 3 occasions and missed number of other opportunities in a game where they dominated Swansea who scored on their only attempts on the goal Arsenal now trail Leicester City by 6 points.

Arsenal took on Swansea City in the premier league game in midweek Wednesday night, 2 March 2016 at Emirates Stadium. Arsenal started with Joel Campbell upfront and he responded with a goal in just 15th minute of the game to put Arsenal 1-0 up. But Swansea bounced back with a goal of their own when Wayne Routledge made it 1-1 on the night. Ashley Williams scored late in the second half to put Swansea City 2-1 up.

Goals from Wayne Routledge and Ashley Williams overcame Arsenal’s slender one goal lead. Arsenal now face the prospect of already losing out the title race after this massive defeat and they travel to face Tottenham on Saturday afternoon.

Since couple of other high profile games are getting played at same time on Wednesday night, Arsenal-Swansea won’t be covered live in United Kingdom. However NBC Sports (US) will have live coverage of the game. If you miss the live action you can watch extended match highlights right here on this page.

Swansea City vs Arsenal Preview: Arsenal need to turn things around after getting two back to back defeats last week, 2-0 home defeat against mighty Barcelona was followed by 3-2 defeat in the hands of second string United side at Old Trafford. Arsene Wenger and players have been criticized for not standing up when things get tough and they are on verge of getting out of the title race if they fail to get points against Swansea City.

Olivier Giroud, Kscielny and Campbell scored for Arsenal the last time these two meet in Premier league back in October as Arsenal ran out comfortable 3-0 winners.

Arsenal who defeated Swansea City earlier in the season comprehensively with 3-0 win at Liberty Stadium, will be looking for a similar result specially playing at home to restore some of the lost faith. Oxlade-Chamberlain is doubtful for the game while Cazorla and Wilshere remain on the treatment table leaving Francis Coquelin and Ramsey to start in midfield. Wenger do have selection headech upfront with Giroud, Welbeck and Walcott fighting for one place.

Swansea City on the other hand is likely to keep the same lineup which were beaten against Spurs at White Hart Lane last weekend. Alberto Paloschi to start upfront with Sigurdsson and Ayew supporting him in attack. 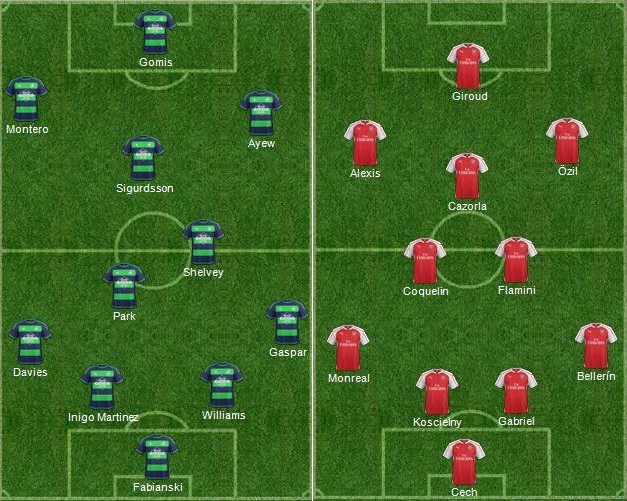 Head to Head and Predictions: Swansea are kind of boggy team for Arsenal having won 4 of the last 9 meeting between the two sides and they will be looking to exploit Arsenal’s lack of character and get some sort of result. Having said that Wenger is looking to a reaction from his players after back to back defeats and we can expect a solid game but Arsenal should have enough in their locker to get the better of Swansea.