Manchester United are set to take on Swansea City in the Carabona Cup round 4 match on Tuesday night, 24 October 2017 at the Liberty Stadium. Jose Mourinho will be looking to get a reaction from his players after the first humbling defeat away at Huddersfield over the weekend which showed major wholes in United’s defense and midfield. Mourinho however is expected to make several changes in the starting lineup and give some of the fringe players a chance against Swansea. The game will kickoff starting at around 19:45 uk time.

Short Match Preview & Possible Starting Lineups: Jose Mourinho has started the season in absolute top form scoring 4 past helpless West Ham side in the opening weekend. United need to continue winning these games against mid table clubs who they failed to breakdown last season. 15 draws last year impacted United’s position in the league and if they can dispose off teams like Swansea on regular basis they are one of the favourites to win the title.

Swansea City 0-4 Manchester United – 19 August 2017
[ Premier League 2017-18 Match ]
45′ 0 – 1 Eric Bailly scored at the stroke of halftime when Paul Pogba’s thumping header was saved by Fabianski but not enough to parry it away as Baily poked home from close range.
81′ 0 – 2 Romelu Lukaku continue to impress as he scored United’s second to pretty much kill the game off.
82′ 0 – 3 Paul Pogba scored in second game running with an absolute peach of a goal.
85′ 0 – 4 Anthony Martial scores with a sweet finish to round off another impressive win for United this time away from home.

Last time these two meet was back in November at Liberty Stadium where United ran out comfortable 3-0 winners thanks to goals from Paul Pogba and Ibrahimovic.

Swansea City 0-3 Manchester United – 06 November 2016
[ English Premier League 2016-17 Match ]
15′ 0 – 1 Paul Pogba opened the scoring for Manchester United in just 15th minute of the game as Mourinho watched from stands after his suspension.
21′ 0 – 2 Zlatan Ibrahimovic was in the mood against Swansea as the grabbed his first of two goals with a neat shot from outside the box.
33′ 0 – 3 Zlatan Ibrahimovic was at it again as he combined well with Rooney before out foxing Swansea defense to poke home from close range.
69′ 1 – 3 Mike van der Hoorn 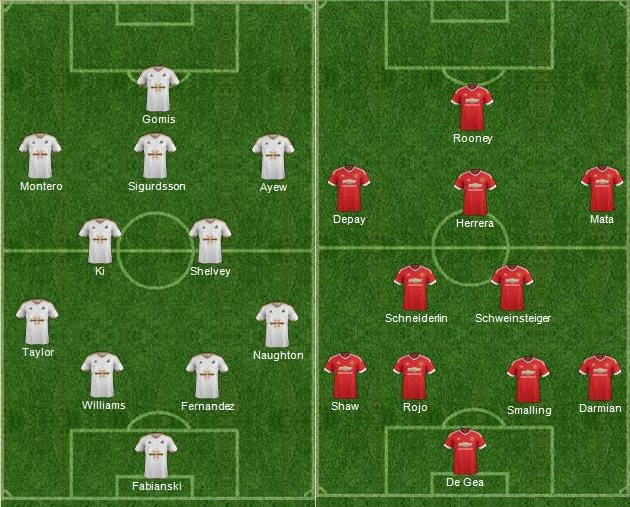 Anthony Martial had given Manchester United the lead just after the break and it looked like they are heading towards their first win in 8 matches but a goal from Gylfi Sigurdsson in 70th minute brought the game back on level terms putting United and Louis Van Gaal under real pressure going into the last quarter of the match. Wayne Rooney score with impressive flicked finish to make it 2-1 for United.

Manchester United were looking for their first win in 8 matches when they hosted Swansea City in the premier league game on saturday, 02 January 2016. Manchester United took the lead just after the break with a thumping header from Anthony Martial but a Gylfi Sigurdsson scored in 70th minute to bring the game back on level terms putting United under massive pressure in the last 20 minutes.