Sweden have put themselves in wonderful position to get through this group F after they defeated South Korean in their opening group game. Andreas Granqvist scored the only goal of the game which came in second half from the penalty spot and with the win Sweden now have 3 points and need just one more win to make it through to the next round.

Sweden are set to open their world cup 2018 campaign with the opening game against South Korea on Monday afternoon, 18th June 2018 at the Nizhny Novgorod Stadium in Nizhny Novgorod city. With Mexico getting the better of Germany in the opening group F game it gives this group an interesting twist. Sweden and Korea must win this game to stand a chance for qualification. However, neither team is in particularly good form heading into the world cup and with games against Mexico and Germany remaining they face an uphill task of qualifying from this group.

Match Preview & Team News: Sweden have been in poor form since beating Italy in the Playoffs and they failed to score in any of the 3 warmup games they played before the world cup and to top that off they did not register a single goal in 3 friendlies before heading to Russia. However, Sweden are unbeaten in their last 9 group games in previous world cups but again another state Sweden fans won’t like is the fact Sweden have only kept 3 clean sheets in their last 24 world cup matches.

South Korea on the other hand are no longer they team they were in previous decade or so. They do qualify for world cup with rather ease but as soon as they world cup begins they struggle. They have only won 1 of their last 9 world cup games but playing against a very fragile Swedish side and with Heung-Min Son fit they might have a chance here on monday afternoon.

Possible Starting Lineups: This is how I expect both teams to lineup on Monday. 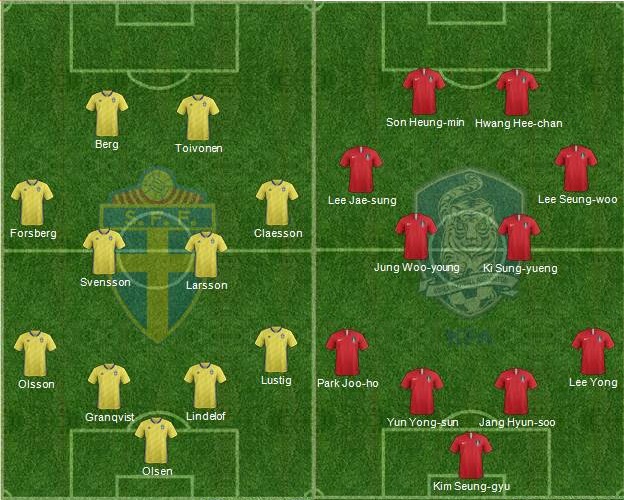 Match Predictions: Now this one is hard to predict even more so considering the results in the world cup so far. This event is shapping up a very competitive one an there hardly been a game which was one side (except Russia-Saudi). Sweden are a better side on paper and although did not have much of joy in friendlies leading up to the world cup they might turn on in the tournament itself. South Korea are struggling and they rely heavily on Spurs striker Son, so if Sweden can keep him quite they have a good chance. I am going with a 2-1 win for Sweden in this one.