Tottenham are set to take on Borussia Dortmund in the UEFA Champions League on Tuesday, 21 November 2017 at the Westfalenstadion in Dortmund. Tottenham has already qualified for the knockout stages after getting 10 points of the opening 12 available and another win on Tuesday will confirm them as group winners ahead of Real Madrid who have 7 points. The game will kickoff at the usual european night time kickoff at 20:45 CET / 1945 uk time and BT Sports has live coverage in the UK.

Both Spurs and Dortmund are meeting for the very first time in UEFA Champions League however they did play against each in Europa League quarterfinal in 2016.

However a lot has changed since than, this Spurs side are proper premier league title challengers while Dortmund has drifted away from their consistency over the last couple of seasons. On paper this looks like a very difficult group for Tottenham but they are a better side than Dortmund and all they need is win their home ties and they should be alright to qualify.

Last time these two meet was back in March 2016 in Europa League quarterfinal when Dortmund eased passed Spurs 5-1 on aggregate over two legs.

Team News & Lineups: Borussia Dortmund are coming into this game on the back of a 0-0 draw against Bayern Munich in German Bundesliga while Tottenham were held to 2-2 draw against Arsenal in the premier league. Considering both teams position in their respective leagues we can safely assume they will qualify for the Champions League regardless they win Europa League or not which kind of give both camps opportunity to go easy, Specially Spurs who are well and truly in the premier league title running just 5 points behind Leciester.

Dortmund is likely to go with the same starting lineup which took the field against Bayern Munich over last weekend while Tottenham might make a few changes. Papastathopoulos is still out with with groin injury while Tottenham will be without Dele Alli who will serve his 1 game suspension in European game. Pierre-Emerick-Aubameyang is one player Spurs will be looking to keep in check in the first leg and if they can get a result they will be in pole position to qualify for quarter finals as the second leg is taking place at White Hart Lane next week.

This is how I expect both teams to lineup on Thursday. 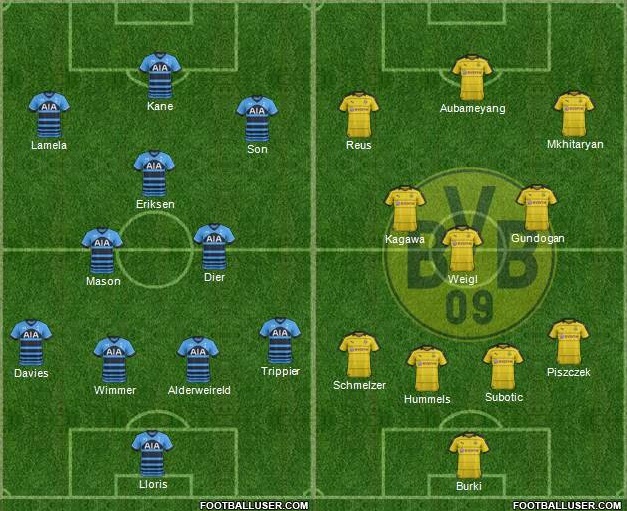 Match Predictions: These sides have never meet in a competitive game before at European stage and that kind of makes this match exciting as one of the best teams from England vs equally match German side go head to head in what should be cracking double header. Considering Spurs are playing second leg at home they will be slightly favourite to go through but Dortmund has more experience when it comes to European competitions. Having said that I can see Spurs getting a score draw on thursday night.