UEFA Champions League resume this week with the first knockout stage (round of 16) matches including some very high profile ties set to be played over the next couple of weeks. 5 english teams have made it to the round of 16 and one of them is Tottenham who will play Juventus in the double header starting with the first leg at Juventus Stadium in Turin this Tuesday, 13 February 2018. A massive test for Spurs who are coming into this game on the back of incredible run of three games unbeaten against United, Liverpool and Arsenal winning two of them. If they can avoid defeat in the first leg, they stand a great chance of qualification to quarterfinals.

The game will be played at the Juventus Stadium in Turin on Tuesday, 13 February 2018 and it will kickoff at around 20:45 CET / 19:45 uk time and BT Sports has the live coverage rights in the UK. US Viewers can watch the match live on FoxSports while beIN Sports will have live coverage in the middle-east.

Team News & Lineups: Harry Kane has been in absolute top form currently leading the goal scoring charts in the Premier League and he also bagged 6 goals in the 5 champions league games he has been part of so far this season. Juventus need to be vary of Tottenham’s attacking trio of Kane, Song and Eriksen. We can expect a tight game in Italy where Juventus will be slightly favourites since they are playing at home. Tottenham will need to avoid defeat in the first leg which will give them a good chance of taking Juventus back to Wembley under pressure.

Juventus will start with Higuain leading the forward line with Dybala, Douglas Costa and Pijanic playing in the attacking roles ahead of midfield duo of Matuidi and Khedira. Tottenham on the other hand will have Lucas Moura available for this game while Wanyama might get a nod in midfield alongside Dier or Dembele.

This is how I expect both teams to lineup on Tuesday night. 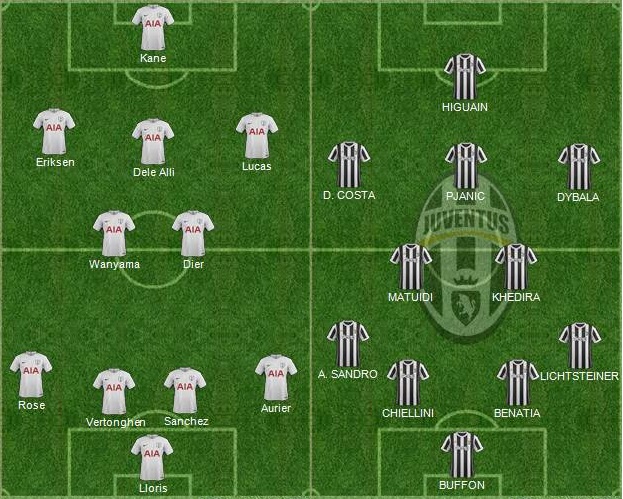 Match Predictions: Juventus are playing at home and they will be favourites to win this first leg but Tottenham have shown over the last couple of weeks that they are ready to take the big step forward and going head to head with big european giants. Alot depends on the result of first leg and if Tottenham can withstand the pressure for Juventus in Italy and take something to defend to back to Wembley they have a great chance of qualification. I do expect Juventus to win the first leg but Spurs to get an away goal which might prove pivotal.