Pep Guardiola and his rampant Manchester City side take on another big test on Saturday evening, 16th December 2017 when they take on Tottenham at Etihad Stadium. Having won 16 of the opening 17 matches, Pep Guardiola’s men are 11 points clear at top of the table and another win against Spurs will complete an incredible record against so-called top 6 teams. However a defeat against Spurs and United winning their match against West Brom on Sunday will reduce the gap to 8 points which kind of open the door for the chasing pack. The game kicks off at around 17:30 uk time and BT Sports has live coverage of this match.

Its a massive game as far as the title race is concerned because if Manchester City wins this game they will go pretty much out of sight at top of the table with 14 points lead with just 18 games played so far this season. While Tottenham who have absolute shocker of a record against big teams away from home will be hoping to finally break string of poor result against top 6 teams and this match give them an oppertunity to do just that.

After a considerable blip in November, Spurs are starting to look like a well oiled mechine and we can expect them to give a good fight to Manchester City in this game. However looking at the form City are in at the moment I can see Spurs getting a win here.

Last time these two meet Spurs produced a superb 2-1 win over Manchester City back in February 2016.

Man City vs Spurs Team News: Pep Guardiola is expected to keep the same lineup which took the field against Swansea last weekend. Only absentee will be Kevin De Bruyne and it will be a big one as he has been the main architecture on City’s incredible run of results. First game without him against Celtic and City dropped points and that might be the case this weekend as well. Both teams will be happy with a draw but its Spurs and other teams who need the win more than City do. 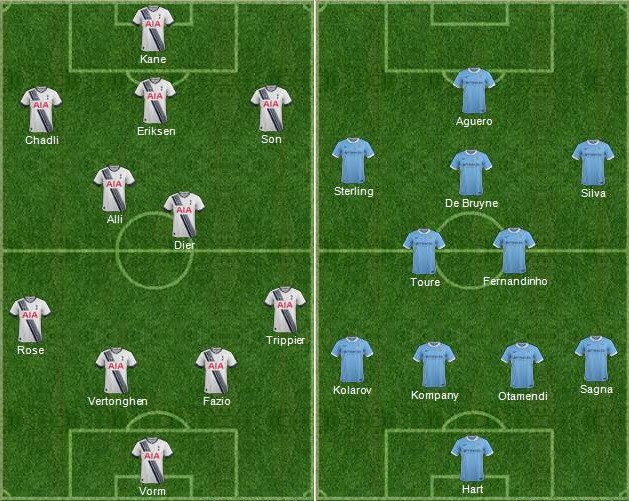 Match Predictions: After incredible run of 10 consecutive wins, Manchester City finally dropped points in midweek game against Celtic where they drew 3-3 in one of the best games this season. With Kevin De Bruyne City lacks that cutting edge and thats where Tottenham can exploit specially playing at home. I sitting on the fence in this one and going with another high scoring 2-2 draw in this important premier league match.