Tottenham were hoping to secure their place in the champions league knockout stages when the visited France to face Monaco but boy they were hit with a reality check as Monaco bossed first half where they missed penalty and couple of other chances but game came to life in second half where Djibril Sidibe and Thomas Lemar scored either side of Harry Kane’s equalizer to put Monaco back in the lead.

A.S Monaco 2-1 Tottenham Highlights
[ UEFA Champions League 2016-17 ]
Half-Time Report – Monaco absolute bossed the first half and should have scored atleast two goals but a penalty save from Lloris and couple of other missed chances kept Tottenham in the game.
48′ 1 – 0 Djibril Sidibe scored just after the break to put Monaco 1-0 in lead and at that point Tottenham were heading out of the Champions League.
52′ 1 – 1 Harry Kane
53′ 2 – 1 Thomas Lemar

Tottenham vs Monaco Preview & Team News: Alot has changed since both of these sides meet last season in the group stages of Europa League. Tottenham ran out comfortable winners in both legs. Spurs are stronger now having made a superb title challenge in premier league last season. Playing at Wembley, they will be making history with a biggest crowd for quite sometime in british club football. Below is the review from last year’s match.

Erik Lamela continued his superb goal scoring form with a first half goal in 35th minute which put Spurs 1-0 up at the break but unfortunately it was not enough to see of the game with former Milan player El Shaarawy popping up with the equaliser in 81st minute.

Spurs on the other hand defeated Manchester City 4-1 over last weekend and they will be beaming with confidence going into thursday night game in Monaco. Ryan Mason and Mousa Dembele are both expected to play some part for Spurs against Monaco after recovering from their respective injuries. Harry Kane might be rested with Heung-Min Son started upfront for Spurs.

Monaco on the other hand will give Stephan El Shaarawy a chance to lead the line while Nabil Dirar is also expected to play the no.10 role behind Shaarawy. Here is how I expect both teams to line-up going int the important Europa League clash. 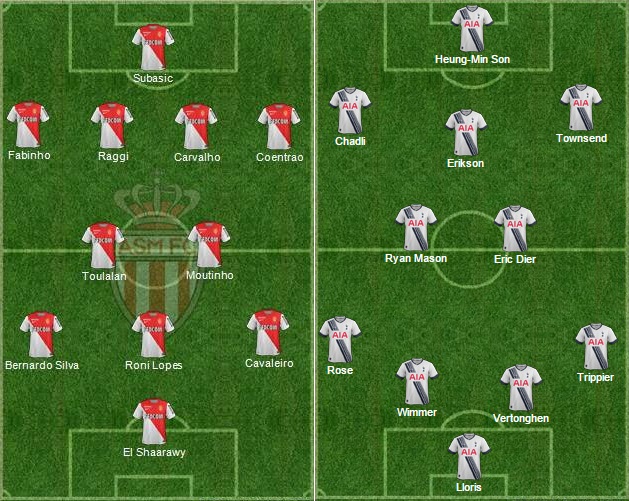 Predictions: Tottenham are coming into this game on the back of a impressive run of wins and spurs manager Pochettino might decide to rest some key players which will give home side Monaco a slight advantage who are desperate for some decent results. I am going with a 2-1 home win for Monaco.

Tottenham started their 2016-17 UEFA Champions League campaign at Wembley Arena in London against French outfit AS Monaco. But their night did not go as planned with Monaco scored not once but twice inside the first half and hour leaving Spurs with a mountain to climb in the remaining hour. But Spurs hopes of comeback were strengthen when Toby Alderweireld scored just before the break to make it 2-1. We will have match highlights of this game right here.