Tottenham streamrolled Stoke City in what was a very one sided affair on Monday night, 18th April 2016 to reduce the gap at top of the table to just 5 points with only 5 games remaining in the season. Dele Alli and Harry Kane scored 2 goals a piece in what was a routine win for Spurs.

Harry Kane’s early goal in 9th minute had put Spurs 1-0 up to ease the nerves for spurs at Britannia Stadium on Monday night. After that Spurs resiliant defense hold out Stoke’s constant pressure and game was still 1-0 for Spurs at the break.

Stoke however started better in second half and could have equalized on several occassions before Dele Alli provided the sucker puch which kind of opened the flood gate and Kane and Alli scored twice in last 20 minutes to earn a comfortable 4-0 win for Spurs.

09′ 0 – 1 Harry Kane scored after Dembele put him through on the left side, Kane turned inside and unleased a superb right footed shot past stoke keeper. 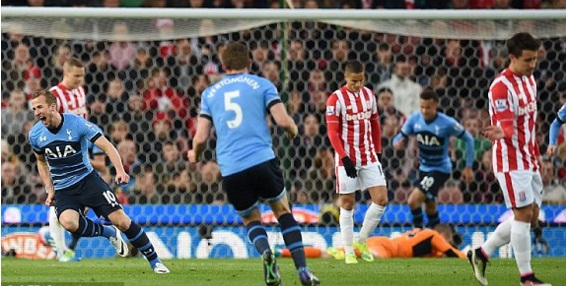 67′ 0 – 2 Dele Alli scored after a superb ball from Eriksen put him through on goal in 67th minute to seal the win. 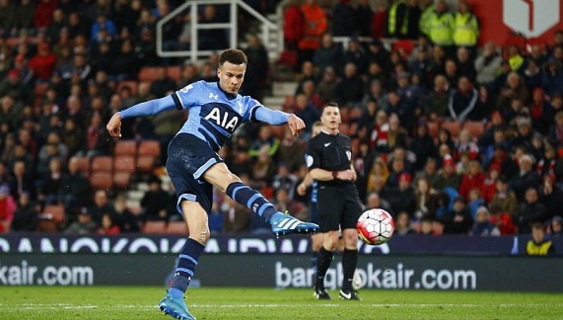 71′ 0 – 3 Harry Kane after Alli missed a sitter of a chance, Lamele played Kane through and he taps in for third of the night.

82′ 0 – 4 Dele Alli scored with a good volley after Eriksen put in a decent cross.

Spurs now go 68 points only 5 behind Leicester City who drew their game on Saturday against West Ham. Title race is wide open now as Leicester City will have to play under massive pressure when everyone is expecting them to wrap up the league. Its all set for a superb month of premier league action as both Leciester and Tottenham battle it out for league title.