United States took on Ecuador in the first quarterfinal of 2016 Copa America and it was quite a game which had everything. USA took the lead early midway through the first half when record goal scorer Clint Dempsey put USMNT in lead. Ecuador came out of the shell after going behind but USA held their own till the half time break. After the restart things boiled up with Jermaine Jones getting straight red for hitting ecuador player in the face while Antonio Valencia also got his second yellow as both teams are down to 10-men. Gyasi Zardes sealed the win with 65th minute strike. 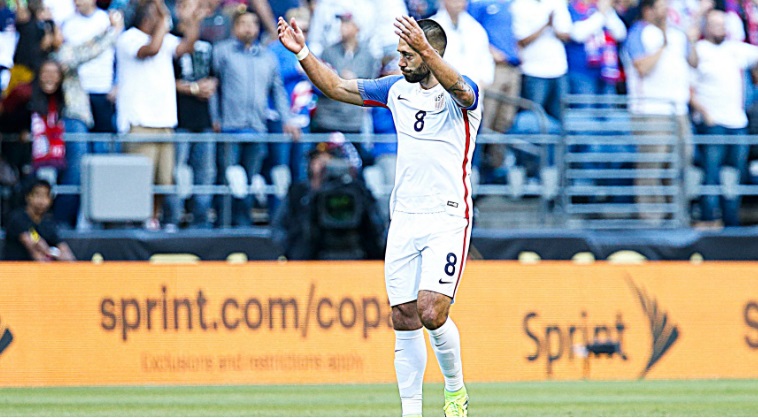 United States 1-0 Ecuador Highlights
[ Copa America Centenario 2016 ]
22′ 1 – 0 Clint Dempsey scores in 22nd minute to put USMNT in lead after some dominant display in the opening exchanges.
53′ Jermaine Jones saw a straight red when things got a bit ugly in second half. He was caught hitting Ecuador player in the face.
53′ Antonio Valencia also got his marching orders at the same scuffle getting his second yellow card.
65′ 2 – 0 Gyasi Zardes scores in second half to seal the semifinal spot for USA.
74′ 2 – 1 Michael Arroyo scores late in second half to provide comeback hope for Ecuador.

Match Preview: The winner of first quarterfinal will face either Argentina or Venezuela in the semifinals and USA will be eager to make it past Ecuador and setup a potential clash against Lionel Messi and company. Ecuador are no push overs who are unbeaten in the competition and only conceded two goals so far in the three games and they will pose a massive threat on the counter attacks. It is widely hailed as a 50/50 game but USA at home soil playing some quality football and taking the games to opponent.

Ecuador on the other hand are a close knit unit who defend as a team and rely on their fast counters. Both sides meet in the build up to the copa america and USA registered a 1-0 win but this is a total different game with competitive edge to it and we can expect Ecuador to make it difficult for USA.

Possible Starting Lineups: USA do have some suspensions to worry about as DeAndre Yedlin was sent off against Paraguay and Klinsmann will have to tiknerup a new back-line which can cope with pacy forwards of Ecuador. Klinsmann has been up-beat leading up to the game and hopes squad depth can play its role getting USA further in the competition. This is how I expect both teams to lineup on thursday night. 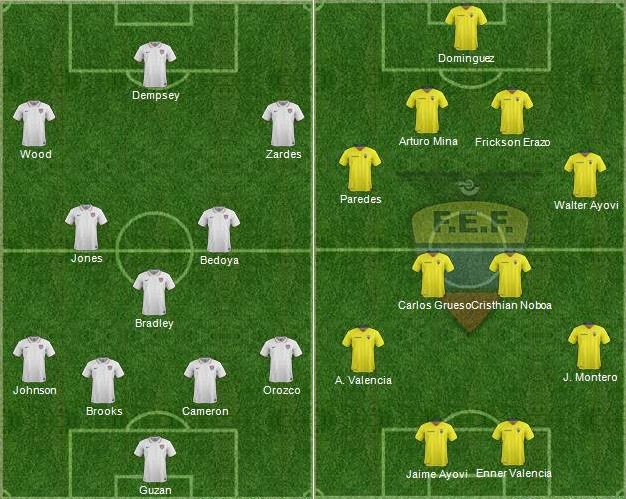 Dempsey, Wood and Zardes should keep their place as front three trio while Jones, Bradley and Bedoya to start in midfield. Ecuador on the other hand will play with two upfront in Enner Valencia and Jaime Ayovi while Valencia, Montero, Noboa and Grueso to play as four man midfield.