United States Women team beat China in the quarter final match with a 1-0 win a goal from Carli Lloyd was enough to see of the challenge from a resiliant and stuborn china women team. Now USA will face free scoring Germany in the semifinals on 30th June 2015.

Usa were the better team going forward but China did make their life difficult at times with their physical ability. Hope Solo had to be at her best to keep china at bay. 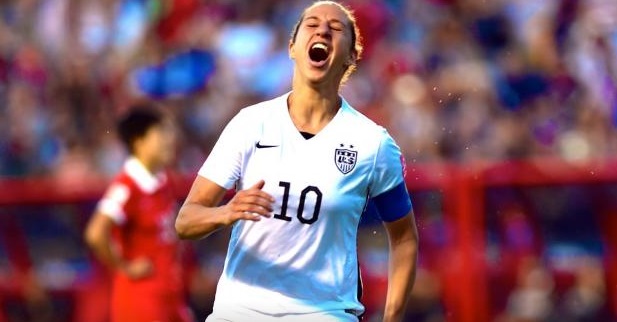 United States women team cruised through to the quarter finals of 2015 FIFA Women World cup after beating Colombia in the round of 16 game by 2-0 where Alex Morgan was on target. Their next assignment is China in the quarter finals who on the other hand defeated Cameroon in the last round by 1-0 scoreline.

United States women team are one of the favourites now to win the big competition after 16 long years while bookmakers has China at the worst odds to win the competition at 65/1 although they are much better team than Colombia who game USA a right scare atleast for the fist 45 minutes. China are currently ranked 16 in the FIFA Women rankings.

They also have a strong player in Wang Shansho who most of her career played in central defense but during the 2015 World cup she has been playing upfront as centre forward and the move has been paying dividens.

She is tall, strong and can pose a real aerial threat for the USA team. Shansho has already scored twice so far, once against New Zealand in the group game and than the most important only goal of the game against Cameroon.

United States on the other hand will be happy to see Alex Morgan on the scoresheet who scored in the 2-0 win over Colombia having started her first game in the competition.

Now If USA were to win the world cup after 16 years they will have to go through China the same team they beat in the final of fifa women’s world cup back in 1999 at the rose bowl, USA. USA are struggling to score goals on consistant basis but as far as their defense is concerned its top notch having not conceded a goal in last 333 minutes.

Match Predictions: Both teams have been exceptionally well in the defense but going forward you can not say the same. USA will be boosted with the fitness of star stiker Alex Morgan who is will be starting upfront and full of confidence after her goal against Colombia. China on the other hand build their team on organization and defensive unit. I can see both teams canceling each other out for most part and a moment of magic or two from either side will win the game. I cam leaning towards USA to win this one 1-0.