Real Madrid continue their 2017-18 La Liga campaign with another difficult game against high flying Valencia side at mestella stadium on Saturday afternoon, 27th January 2018 starting at around 16:15 CET / 15:15 uk time. Valencia are currently 5 points ahead of Real Madrid into third place and if they can get the better of Real Madrid on Saturday they not only go 8 points ahead of fourth place Madrid but it might also force Perez to sack Zidane before the double header against Paris Saint Germain. If you missed the live action, you can always tune in here for full match highlights after the game.

Real Madrid won their opening game in a routine outing against Deportivo La Coruna thanks to goals from Bale, Casemiro and Kroos and they will be eager to keep their winning run going against Valencia who they defeated last time these two meet. However Valencia did got the better of Real Madrid at Mestalla earlier in 2016-17 season.

Last time these two meet was back in May 2016 on the last day of La Liga where Ronaldo and Benzema scored goal a piece in first half to put Real Madrid in commanding 2-0 lead at the break. But Valencia hit back just after the halftime when Rodrigo scored for Valencia to bring them back in the match. Ronaldo and Andre Gomez were on target for either side to setup a grand stand finish.

Zidane is likely to go with a strong lineup and with Bale back in the contention Madrid might revert to their preferred 4-3-3 system with Ronaldo, Benzema and Bale playing upfront while Modric, Kroos to start in midfield and we might see either James Rodriguez or Isco lining up with midfield duo.

This is how I expect both teams to lineup on sunday. Real Madrid should be slightly favourite to win against Valencia looking at the recent record of both sides. 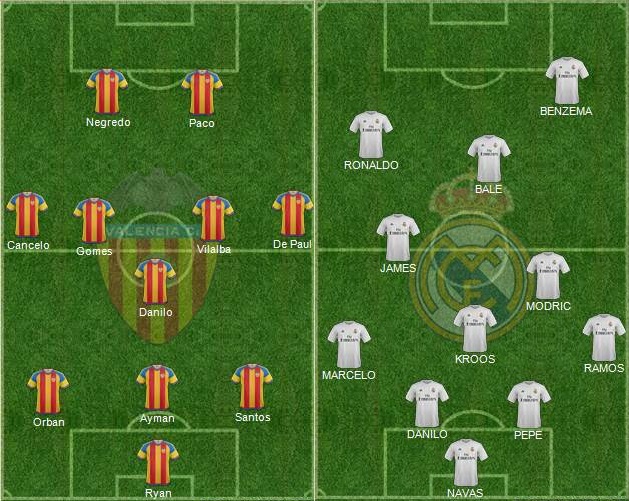 Match Predictions: Real Madrid saw off the challenge from Manchester City in the Champions League semifinal and qualified for their record 14th Europa Cup final and they are pretty much in good shape to challenge for La Liga title as they sit just 1 point behind the top two of Barcelona and Atletico. Looking at the form of both R. Madrid and Valencia I can only see one result in this one and that’s a comprehensive Real Madrid win.