Welsh fans would not have even dreamt of such a campaign as Wales ripped through Russia to make it 3-0 and win the game which put them top of the group. Ramsey scores early in 11th minute after a great counter attacking move while left back Neil Taylor made it 2-0 in 20th minute. Gareth Bale scores mid way through the second half to make it 3-0 and put the game to bed as Wales qualify for the knockout stages for the very first time in their history. 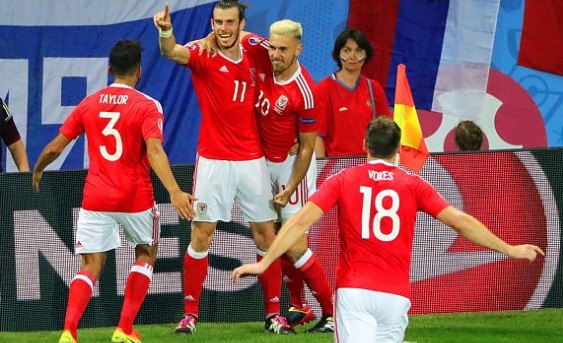 Wales 3-0 Russian
[ UEFA European Championship 2016 ]
11′ 0 – 1 Aaron Ramsey scores after a superb counter attack where Joe Allen put him through on goal and rasmey makes no mistake in putting the ball in the back of the net.
20′ 0 – 2 Neil Taylor scores to make it 2-0. Another counter attack move see left back one on one with keeper his initial shot is saved but rebound fall nicely for him as he taps home.
67′ 0 – 3 Gareth Bale scores his third of the tournament and this time from open play to make it 3-0 for wales and go top of the group.

Wales has played two games, won 1 and lost against England which is not a bad results considering next they are playing probably the weakest team in the group. Russia salvaged a draw against England in the opening fixture while 2-1 defeat against Slovakia has put them rock bottom. Their performances has been poor and they lack creativity in final third which was evident in both of the opening games. Wales will fancy their chances and a win will not only confirm their qualification but it might also win them the group if England drop points against Slovakia.

Team News & Expected Lineups: Russia do have some selection problems with quite number of players struggling for form. Igor Denisov is sure to miss the last group game while Denis Glushakov might be rewarded a start after his goal against Slovakia.

Welsh coach Chris Coleman will be without Joe Ledley who suffered leg injury against England but the starting lineup should be the same like last game. This is how I expect both teams to lineup on Tuesday night.

Match Predictions: Russia must win this game to give themselves a chance to qualify while Wales will secure knockout berth even with a defeat if England beat Slovakia. So its all to play for on Tuesday and I am going with Russia to finally come good a snatch a win putting them in the last 4.