Liverpool started the 2017-18 season just like last year with a high scoring game where they went behind against Watford thanks to 8th minute goal by Stefano Okaka Chuka. Sadio Mane equalized before Watford took the lead again minutes later. After the break however Liverpool came out with a purpose and scored two goals in 5 minutes thanks to Firmino penalty and Mohamad Salah tap in goal to complete the turn around.

Watford 3-3 Liverpool Highlights
[ Premier League 2017-18 Season ]
08′ 1 – 0 Stefano Okaka Chuka opened the scoring for Watford inside first 8 mintues to surprise both home and away fans at Vicarage road.
29′ 1 – 1 Sadio Mane equalized for Liverpool are wonderful play on the edge of box and a neat finish.
32′ 2 – 1 Abdoulaye Doucoure restored Watford’s lead minutes later with a headed goal from corner kick.
55′ 2 – 2 (Penalty) Roberto Firmino equalized for the second time for Liverpool just after the break.
57′ 2 – 3 Mohamed Salah scored his first goal for Liverpool in premier league with a tap in after Firmino had chipped the keeper.
90′ 3 – 3 Miguel Britos

By the time Liverpool vs Watford gets underway Coutinho’s transfer to Barcelona might have agreed if not there will be massive rumours surrounding this game specially if the Brazilian don’t start. Adam Lallana is also out for a couple of months leaving Jurgen Klopp under pressure to improvise to get a result against a very stubborn Watford side who appointed Marco Silva as their new manager who lost his first home game in three years back in April 2017 with Hull City. His team usually are very strong at home and very hard to beat.

Team News & Lineups: Liverpool are likely to be without Coutinho (did not train) Danny Ings (Injured), Sturridge (Injured) and Adam Lallana (Injured). Which means Firmino, Mane, Salah to start upfront in three man attach while Emre Can, Henderson and Wijnaldum to start in midfield.

Liverpool on the other hand will be without Danial Sturridge once against which means Benteke, Lallan and Coutinho to take attackng roles with Henderson, Lucas and Emre Can playing in midfield. Clyne, Moreno, Skrtel and Sakho makes back four. This is how I expect both teams to lineup. 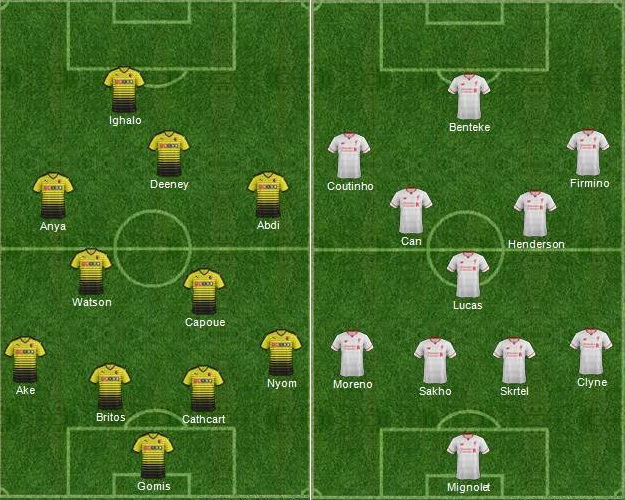 Match Predictions: Watford has yet to lose a game against a team below them this season and their home form has been pretty decent where they make things difficult for visiting teams by defending in numbers and using pace on the counter attacks. Liverpool has pretty similar style under klopp on their away trips which means it might turn out to be one of those boring dull affairs where both teams cancel each other out. It will need a moment of magic from either side to get a result here and having drop points in last two matches I can expect a reaction from Liveprool and I am going with a narrow 1-0 win for Liverpool in this one.

Liverpool took on Watford in their penultimate league game this Sunday afternoon, 08 May 2016 and Klopp started with several youngsters in the starting lineup and they did not disappoint as Liverpool took the lead in 35th minute with a goal from Joe Allen. Watford had their moments in the game but Liverpool dominated most part of the first 45 minutes and game was still 1-0 in Liverpool’s favour as both teams went into the break. Roberto Firmino gave Liverpool a 2-0 lead after a superb goal in second half.