Manchester United are set to travel as they face Watford in huge premier league game on Tuesday night, 28th November 2017 at Vicarage Road as part of the midweek schedule. Having secured a lucky 1-0 win over Brighton, United fans will be vary of Watford who are flying high at the moment under manager Marco Silva but Watford’s home form has been shaky where they won just 2 of the 6 premier league games. But United have the same record away from home winning just 2 of the opening 6 games. So it sets up a cracking tuesday night football and we will have live links and match highlights right here on this page.

Watford 2-4 Manchester United Highlights
[ Premier League 2017-18 Match ]
19′ 0 – 1 Ashley Young scores with a stunning low strike from the edge of the box to make it 1-0 for United.
25′ 0 – 2 Ashley Young scored absolute peach of a freekick to double United’s lead.
32′ 0 – 3 Anthony Martial was on hand to score United’s third with a delightful finish from the edge of the box.

Watford vs Manchester United Preview: Manchester United’s early season form has kind of the disappeared over the last few weeks. They look less and less convincing in the league as the week go by. However two back to back wins against Newcastle and Brighton at home have kept them 8 points behind City but now they face two back to back away games against Watford and Arsenal and 6 points in those two games are paramount.

Watford on the other hand are flying high at the moment currently sitting eighth in the league with 21 points thats only 4 behind fourth placed Arsenal. If they can produce another win on Tuesday that will put them above Burnly and closer to Liverpool. United were beaten at this ground last year and Marco Silva’s Watford will make it really difficult for them on Tueday night. 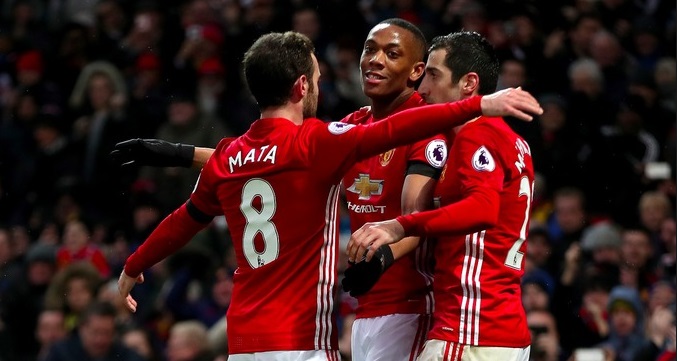 Manchester United record a comfortable 2-0 win over Watford last time these two meet back in February 2017. Juan Mata and Martial were on target for United however Watford inflicted a 3-1 win over United earlier in the season at Vicarage Road back in September 2016.

Manchester United 2-0 Watford – February 2017
[ English Premier League 2017 Match ]
32′ 1 – 0 Juan Mata scored the only goal of first half with a neat finish from close range. However United should have put the game to bed with the chances they created from 20 minutes onwards.
60′ 2 – 0 Anthony Martial scores at the near post after quick counter attack allowed him to run at Watford defense. 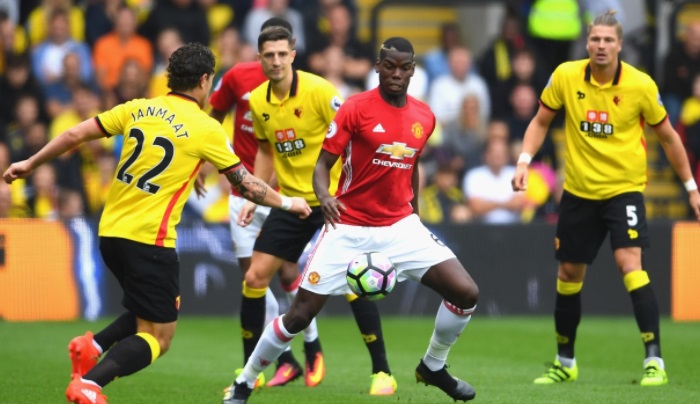 Watford 3-1 Manchester United – Septemebr 2016
[ English Premier League 216-17 season ]
34′ 1 – 0 Etienne Capoue scores from the edge of the box after a nice cut back from the right side. Although leading upto the goal Martial was fouled which referee waved play on harshly.
62′ 1 – 1 Marcus Rashford again to the rescue of United as he scores from close range to make it 1-1 on the day.
84′ 2 – 1 Juan Camilo Zuniga scored just after coming on as a sub. Pretty similar to the first goal after nice cut back found Zuniga in massive space inside the box.

Manchester United are likely to start with Fellaini in the central midfield role alongside Paul Pogba while Rooney set to return. Mourinho has to make some decision on whether to start with Herrera/Carrick in the midfield or slot Mata/Rashford/Mikhitaryan in attacking roles. 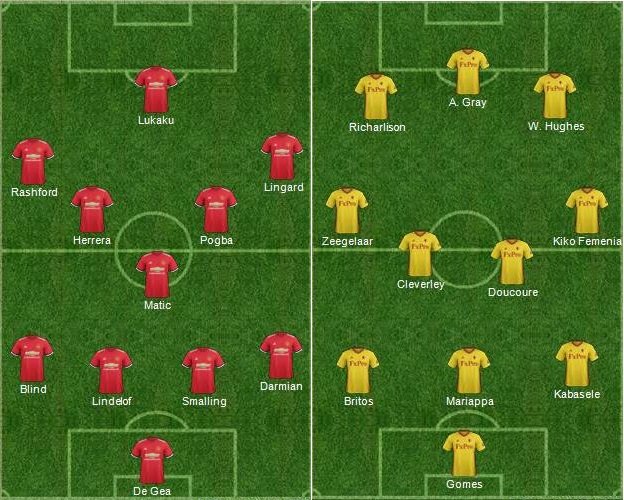 Match Predictions: Mourinho is likely to start with Pogba and Herrera in midfield with Carrick on the bench while Mata, Mikhitaryan and Rashford to play in attacking roles behind Ibrahimovic. Watford do have some powerful players who can out muscle any team in the League and United need to be vary of not going physical with this team. I am going with a United win in this one.