According to box office statistics only 12 sports movies has ever made it past the $100 million mark. Most of these include featured films based on sports, true stories about athlete life, extended documentaries. We take a look at some of the greatest sports movies but instead of focusing only on american sport movies we have compiled a list across different sports. From boxing to Formula 1, Football or baseball.

Note: We have not included any documentaries in the list below. We will be posting entirely different article about great sports documentaries.

Probably the greatest sports movie you are ever going to watch, directed by Martin Scorsese and featured Robert Di Nero as a middleweight boxer who is finding his way to the top of the ladder. He falls in love, find it hard to express his feelings, let it take its toll n himself and his life inside the ring and outside falls apart. It could easily make one of the top 10 movies ever produced and Di Nero’s action in this movie is near perfection. Boxing fan or not, if you have not watched this, do it now and I can confirm you won’t regret it.

Probably the best, the most watched and highest grossing sports movie of all times, The Rocky is a brand of its own. It has been so successful that seven movies has been released in the series but none come close to the orignal 1976 flick directed by John G. Avildsen featuring Sylvester Stallone as Rocky Balboa who is a small time boxer struggling to sort out his life when he was given a world heavyweight title fight against champion Apollo Creed. Against all odds he survive all 12 rounds and match creed on every scale. An absolute epic movie and also the Rocky II, Rocky III and Rocky IV are not bad either.

Darren Aronofsky directed this great movie which is one of the most underrated films you are going to see. Story revolves around an aging wrestler who has past his prime in the ring and after a vicious beating finally decide to retire. Meets a stripper, goes into on-off relationship and tries to win back his daughter from previous relationship before eventually making a way back into the ring. Dramatic, close to realism unlike other happy-ending stuff and some very unique camera angles and respect given to sport of wrestling keeps you gripped. Quality movie overall and I will give it 10 out 10 just like boxing flick Raging Bull. 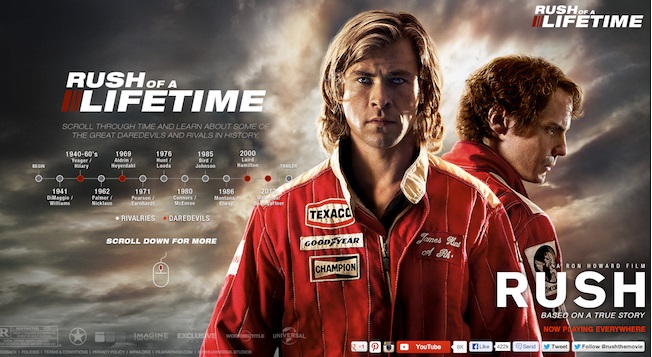 Based on one of the most epic sports rivalries of all times between Formula 1 drivers Niki Lauda and James Hunt. Chris Hemsworth plays the role of playboy James Hunt who defeated Niki Lauda for the F1 world title which is the biggest achievement of talented but inconsistent James Hunt. Movie takes you right into the heated rivalry and this is one movie I would recommend for any motosport fan.

Based on Mixed Martial Arts (MMA, Warrior is a action/drama movie which put two estranged brothers on what becomes a collision course. Its superb movie and one of the the very underrated films in recent years. It scored 8.2 rating on IMDB and features some beatiful action from Tom Hardy and Joel Edgerton.

Directed by Boaz Yakin, Its a emotion roller coaster ride revolving around College football which holds such big importance for the people of Virginia but when Allblack schoole is integrated with all white school all hell breaks lose. Denzel Washington plays the role of head who is given the chance to make or break his career on that one game.

Apparently boxing makes great sports movies and one of the recent flick directed by David O. Russell features a true story of an Irish born boxer Mickey Ward (played by Mark Wahlberg) and his older step-brother Dicky Eklund (played by Christian Bale). Talented Mickey Ward struggling in the company of his drunk brother trainer takes his fate into his own hand and lands a title shot while Dicky spend time in the jail and return from jail just in time to help Mickey win the world title. Absolute class movie and unlike other boxing flicks it is based on a true story giving it more weight.

Based on Michael Lewis book, Moneyball features a story of of Oakland A’s general manager (played by Brad Pitt) who faces a stiff test of keeping up with the big spending/budget teams and he challenges old-school traditional baseball player recruitment pan and brings in analytical/statistical approach in signing new players eventually bring together a solid squad from scraps left-overs by other big teams as they go 20 games unbeaten.

A sports agent who mainly deal with baseball and american football players in the US hit by crisis turn to unconventional recruitment style. He travels to India and stage a talent hunt programe hoping to find couple of quality cricketers who he can train to turn into baseball players. Its based on a true story and a very quality movie to say the least.

Now this movie won’t make most people’s top 50 sports movies let alone top 10, but football/soccer being the most popular sport in the world, we had to name one full featured film on this global sport. Goal story based on a young street football from the outskirs of LA who find his way to the top level football in England with the club Newcastle United before making his dream move to world greatest football clubs Real madrid. Again this is not the best movie of them all but certainly brings euphoria related to European football.

Unconventional but the greatest movie produced on horse racing. Directed by Randall Wallace, it features a story about a amateur women jockey Penny Chenery who with the help of legendry trainer makes her way to the top of horse racing and becomes the first women jockey to win the tripple crown in male dominated sport.

Another top american football movie, Invincible is based on true story of a Philadelphia native Vince Papale who is a bartender at the age of 30 and players occassional football with mates before joining up a talent hunt scheme by Philadelphia Eagles new coach in 1976. Against all odds he went on to represent his beloved Philadelphia Eagles and signs a professional contract.

Based on a true story on the life of Michael Oher who became all american football player but not before spending his younger years and teenage years either in foster home or homeless. Leigh Anne played by (Sandra Bullock) and Sean Tuohy had a big impact on young Michael Oher’s life as his life turned around from homeless to multimillionaire footballer.