It is always a news. An athlete tying knot with a fellow athlete always makes into gossip and glamour section of weekly magazines. It is an issue which gets biblical proportions of public interest and it isn’t a surprise that sometimes this unwanted attention creates undesired effects on their relationship. Let us jog your memory if you already know them or engrave the names of few famous Athlete- Athlete couples if you have been living under a rock and are unaware of their relationship.

Two athletes who are considered as emblem of success in the world of Tennis. Two athletes who redefined tennis by the charisma they brought in the game. The developed a relationship which culminated in the form of marriage in 2001. Steffi Graf is the only Tennis player (male or female) to have won “Golden Grand Slam” which means winning all the four Grand Slams and an Olympic Medal in the same year. Agassi and his wife Steffi have both reigned the tennis world as both of them have remained atop the rankings table. They have two children whom they are not pushing to become Tennis players. This is one relationship that sparked widespread interest among fans from around the globe.

One of the best female boxer of all times Laila Ali married NFL player Curtis Conway and the couple have two children together.

Chemistry’s rules are as applicable in relationships as they are in Chemistry’s exam. Opposite charges attract each other and this is exactly the scenario in Shoaib and Sania’s case. Hailing from countries which have fought at least 3 major wars against each other, Shoaib and Sania fell for each other and much to the media frenzy wedded each other in 2010. This wedding received a media coverage which can only be compared with a royal wedding. Media from both countries had nothing but this wedding to discuss in those days. Both these athletes can be scene supporting each other in their sports. Sania has been achieving laurels for her native country and Shoaib has also made a more than impressive comeback in Pakistan’s team in 2015. Sania was included in the 100 Most Influential People by TIMES magazine in 2016.

This couple was too perfect to stay intact for long. Both these athletes reigned supreme in their professional sports. Rory Mcllroy is a professional Golf player hailing from Ireland, remained World number One in the Official World Gold Ranking for 95 weeks. Caroline on the other hand remained atop the WTA Tour ranking for 67 weeks. Both these awesome athletes started dating each other from 2011 and got engaged in 2013. Things started becoming uncomfortable for Rory who ended the relationship on a phone call in 2014. He considered himself not ready for wedding and wished Caroline best of luck for her future endeavors. 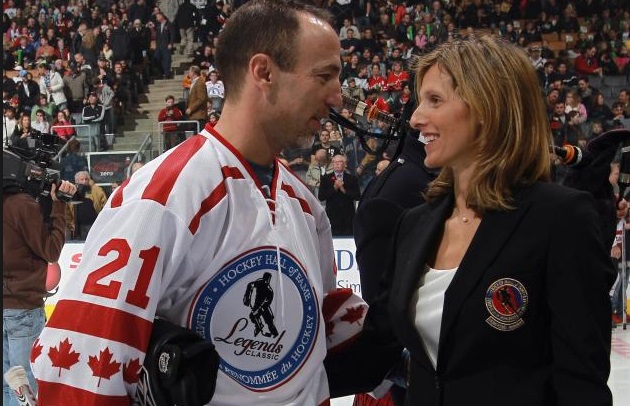 One downside of playing sports, which are yet to gain as much favor with masses around the globe as Football or Cricket have, is that not many people acknowledge your achievements or skills. Ray Ferrero might not be a house hold name but our guy has cored m here ended his career with over 400 goals and assists to the north of 500. He married Cammi Granato, a woman who we suspect for having nerves of steel. She led the U.S. women’s hockey team to the country’s first Olympic gold in 1998. A silver medal found itself hanging from her neck in 2002. This couple stands alongside the most successful athlete – athlete couples.

Two times Olympics Medalist FIFA Women’s World Cup Winner, Mia Hamm was an American soccer player with an illustrated career. She has also been included in National Soccer Hall of Fame. On November 22, 2003 she wedded Boston Red Sox shortstop, Nomar Garciaparra. Nomar is one of the 13 players in Major League History to hit two Grand Slams during a single game and the only player to achieve the feat at his home stadium. This couple has been blessed with two cute daughters and a son.

The 2010 Nationwide Series “Rookie of the Year”, Ricky Stenhouse, American professional stock car racing driver, won back to back Nationwide Series in 2011 and 2012. He started dating the one time divorced Danica Patrick who herself is a big name in the women’s racing circuit as she is the most successful woman in the history of American open-wheel racing. This couple compliments each other like few other do.

7. Matt Treanor and Misty May Treanor

It is one of those couples in which one partner has seen more glory in his or her counterpart. Matt Treanor is an American former baseball catcher in Major League Baseball but he couldn’t taste success as much as his celebrated wife did. Matt met his wife Misty May, a former beach volleyball player in 2003 and they got married in 2004. Misty has won three Olympic gold medals and is the most successful beach volleyball player. Still both these athletes have seen many ups and downs in their career and most importantly they had each other’s back during

Jennie Finch easily stands out between the two when it comes to being more famous. TIME magazine described her as the most famous soft ball pitcher in the history. She helped Team US to a gold medal at Summer Olympics 2004 and to a Silver Medal in Summer Olympics 2008. On other hand her husband hasn’t had much of an illustrated career but their in house chemistry has been exemplary. In fact Jennie retired from her career in 2010 to focus more on her family.The couple is blessed with two sons and a daughter.

The pair met when they were both Soccer players at UC- Berkeley. A relationship that cultivated for years before culminating in the form of marriage on the New Year’s Eve of 2014. The wedding was almost a must attend event for the soccer community of US and it essentially ended up becoming a reunion for US Women’s National Team. The couple continues to live their happy days out in each other’s company.